Soul Nomad & the World Eaters is a Strategy-RPG that focuses on fighting with large-scale units to defeat enemies without relying on the main character's overpowered stats.
PlayStation 2

Soul Nomad & the World Eaters is a Strategy-RPG developed and published by Nippon Ichi Software. It was released in Japan on February 15, 2007 as Soul Cradle: World Eaters, then in North America on September 25, 2007. KOEI later released the game in Europe on June 20, 2008. As opposed to the vast majority of Nippon Ichi titles, Soul Nomad focuses a lot heavier on the overhead-map, troop control aspect of a the SRPG genre. The player has the option of choosing the main character's gender as is given the task of creating and managing massive armies to defeat the antagonist and save the world, despite being put in the role of a character that can become powerful enough to beat the end-boss by himself.

Also opposing much of the developer's previous titles is high amount of customization and the non-present need to grind levels, since players can just buy new units. Soul Nomad also has far more NPC interaction than previous Nippon Ichi titles, in that you can attack and steal from neutral NPCs, recruit NPCs into your party, and even have your relationships with NPCs be effected by selected conversation choices.

You play as a character named 'Revya' who is infused with the soul of Gig, The Master of Death who came to the land of Prodesto 200 years ago. Along with three powerful creatures known as World Eaters, Gig and the World Eaters were trapped into a sword, which in turn came into the possession of the main character. Though the Hero can use Gig's power to become unstoppable, he in turn loses control to Gig which leads to the world being destroyed. The Hero is instead relies on creating and commanding squads to save the world from the World Eaters. 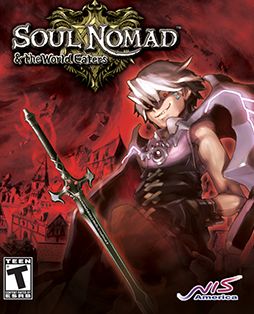