BS Fire Emblem: Akaneia Senki is an episodic strategy game which was released on Nintendo's Japan-exclusive Satellaview Service in four chapters. The game was available for play from 1997 to 1999.

BS Fire Emblem's four chapters were each set in the same universe as Fire Emblem: Ankoku Ryu to Hikari no Tsurugi and Monshou no Nazo. Each segment was set prior to the events of Chapter 1 of both games.

The Dolhr Empire has taken over Archanea Palace. The player takes command of Archanea's Princess Nyna and her allies as she attempts to flee the palace and escape the enemy forces.

Macedon's Princess Minerva and Aurelis's Prince Hardin team up to stop the Macedonian deserters' attack on Aurelis. Minerva and Hardin both act as main characters.

Days after the fall of Archanea Palace, a group of thieves sneak inside to raid it of its treasures. The player takes command of the thief, Rickard.

Part 4: Hajimari no Toki (The Time of Beginning)

Two years after Archanea's fall, Princess Nyna is protected by Grust's General Camus and his loyal Sable Order. Dolhr's King Medeus wishes to see Nyna dead, but Camus is determined to protect her and decides to transport her away to the safety of Aurelis. Nyna and Camus both act as main characters.

Built on the engine designed for Fire Emblem: Monshou no Nazo, the gameplay remains largely the same as the original Super Famicom title, though there are no battle animations. There is limited displayed dialogue and, like the majority of Satellaview games, most of it was streamed and voice-acted.

The four chapters that comprised the game consisted of a single map each. The scenarios were in general quite difficult as they typically set a small team of playable characters against large and/or powerful hordes of enemies. Also, unlike standard Fire Emblem games, each map had a three hour time limit, as each chapter was broadcast from 16:00 to 19:00. The death of a main character would result in a loss, forcing the player to start the map over. However, if a non-main character were to die, the player could revert the game back to the beginning of their previous turn.

The gameplay of each individual chapter was points-based. Points were earned by performing actions such as defeating enemies, visiting villages, and opening chests. Each chapter's story was told almost exclusively through voice acting with the accompaniment of still illustrations at the start and end of the chapter. 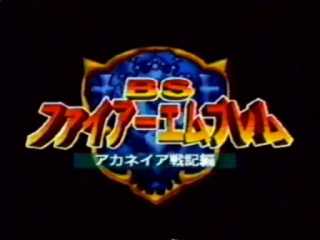