The third Final Fantasy released on the Famicom. This version of the game was never released internationally.

Final Fantasy III is a Japanese roleplaying game originally developed and published for the Nintendo Entertainment System by Square on April 27th, 1990. Although given a 3D remake on the Nintendo DS in 2006, the original NES version has never been published outside of Japan in any officially licensed form. Final Fantasy VI, when it was eventually released in the U.S., would end up being re-branded as "Final Fantasy III" as it was only the third in the series to be published in the states, despite being a completely different game on the Super Nintendo Entertainment System.

The game is set in the floating continent, and puts players in control of four orphans raised by an elder named Topopa in the village of Ur. After an earthquake opens up a hidden cavern in the Altar Cave just outside of their village, the orphans set out to explore what lies within. What they find is a crystal of light which grants them each a portion of its power and instructs them to restore balance to the world.

In the past when the Light was threatening to overtake the world 4 Dark Warriors emerged and cut a swath of destruction. In the present these characters now work for the Light, hopefully to once again restore balance to a world now threatened by the Xande and the Cloud of Darkness--a nihilistic mastermind behind the world’s descent, and the game’s ultimate foe.

The gameplay of Final Fantasy III is a mixture of both previous titles in the series, with several additions. Common staples of the series and genre in general such as an overworld map, random encounters, dungeon crawling and numerous boss battles all remain prevalent, and central to the game's core experience. New features however, such as summons and the removal of others like the active time battle system, make the game distinct in comparison.

Combat in the game is primarily turn-based as was the case with both the earlier games, only without the ATB system. The biggest technical improvement over the original system however is the inclusion of an auto-targeting mechanic for physical attacks which frees players from having to worry about missing a hit completely because the enemy had been killed in a previously queued battle command. This would also later be applied to magical attacks in subsequent games. Another change lies in the graphical display of damage to characters which instead of being shown as a caption, instead are shown above the respective characters' sprites.

Although scrapped as a feature in Final Fantasy II, the experience system introduced in the first game makes a return, along with a completely re-tooled character class system also absent from the second game which would prove to be permanent fixtures in the series.

In Final Fantasy III, players are given a "job system" which essentially allows characters to switch between different classes at any time. Although all four of the player characters begin as a rudimentary class named "Onion Knight", additional and more complex classes are unlocked throughout the game by collecting crystals and can be applied to any of the four characters so long as they have saved enough "capacity points" acquired through battle to do so.

As players earn experience, they also become more proficient with whatever job they have currently equipped. Higher level jobs increase battle statistics of characters, reduce the cost of switching to the job, and increase the effectiveness of specialised weaponry, armor, accessories and spells utilized by the class. Jobs also allow characters to use special innate abilities like the Thief's ability to open secret passages, or battle commands such as Steal which allows players to gain extra loot from battles.

Final Fantasy III is the first game in the series to feature creatures which can be summoned at any time to deal high-level damage to enemies. Summons can be bought in stores, but also defeated in combat and bent to the party’s service. Several of these creatures include Shiva, Ifrit and Bahamut. Similarly, this is the first in the series to feature friendly helper creatures named moogles, a now prominent staple of the franchise. 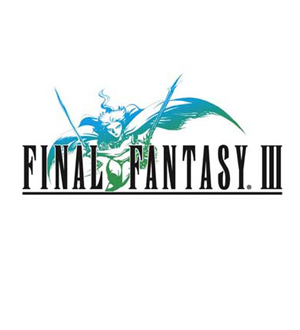