Ar Tonelico II: Melody of Metafalica is the sequel to Ar tonelico: Melody of Elemia and takes place around one and a half years after the original.
PlayStation 2

Ar tonelico II was created by Japanese game developer Gust for the PlayStation 2 console and combines RPG along with dating sim/visual novel gameplay styles as seen in the first game. The game features a new battle system alongside other new additions such as the Dualstall and Replakia systems.

The story for Ar tonelico II is set in the same world as the original on planet Sol Ciel which is inhabited by two races Humans and Reyvateils, with Reyvateils having the ability to use song magic. The player takes control of Croix who is a knight of the Grand Bell Church of Pastlia that is tasked with subduing Reyvateils that have contracted I.P.D. (Infel Phira Dependency) which can make the infected lose control and attack people.

The Main character of the game. He is a rookie soldier of the Grand Bell, The government that controls the world.

He lost his parents as a child and was raised by Luca's mother ever since. As he grew, he developed admiration towards the ideals of Metafalica and joined the Grand Bell knights.

He was the only knight that never required a Rayvateil partner. At first he was very hopeful about the army, but facing a harsh reality, he lost his hope in the Grand Bell and the world. His only joy in life is Cocona, a girl that was orphaned because of an IPD outbreak, and got adopted by Croix.

Croix is supposed to be Lucas boyfriend, but they haven't seen each other since he joined the Grand Bell Knights.

Luca is Croix childhood friend and they lived together until he moved to Pastalia to become one of the Grand Bell knights.

She works as a Dive Therapist in Rakshek using her abilities as a Rayvateil and she has plenty of knowledge when it comes to Diving and Dive Therapy.

Luca is also know for her bad cooking skills and Croix often, indirectly, calls her a bad cook.

Even though Luca hasn't seen Croix since he moved to Pastalia, she sees Croix as her boyfriend.

She is one of the main heroines of Ar Tonelico II. The Holy Maiden of the Grand Bell organization. Like Luca, she is also a Reyvateil. She's been raised in Pastalia Castle and has not gone out much due to the strict rules, so she is socially ignorant and acts very harsh and demanding to the others at first. She is against Lucas line of work, Dive Therapy and says it's against the law. But then later on sees that it's pretty usefull. She adores the stuffed animal called "Gergo". The little girl Sasha is one of few people who actually treats Cloche as a normal person and not as a celebrity.

Battles in Ar Tonelico II are turn based with some time based elements, there are two phases that take place in battle, an attack phase and a defend phase.

The attack phase consists of selecting magic to be used by Reyvateils, building up magic, releasing magic and several normal attacks that can help boost the magic that is being readied.

The defense phase has the player guard the Reyvateils with timed button presses that can negate attacks or inflict less/full damage depending on when the attack and button press is landed/executed.

The Dive system is used by Croix to aid Reyvateils in learning new magic by diving into Reyvateils mind, this section of the game takes the form of a visual novel with the player progressing through a story and using up Dive Points (DP) gained in battle.

The Dualstall system allows one or more Reyvateils to take a bath with special Dualithnode crystals, these crystals can also be placed in certain positions to aid the effect of the crystals which in turn boost levels and stats. Additional accessory's and powders can be added in the bath that effect these stats alongside events that can occur when two Reyvateils bathe together opening up a visual novel style interaction.

The localization for Ar Tonelico II has been criticized by fans due to the English script having numerous mistranslations, grammatical errors, spellings mistakes and terminology inconsistencies. The script was extensively rewritten as well to contain more sexual innuendos, which was advertised as a selling point by NIS America. The US version also introduced several bugs to the game including one that caused the game to freeze during the battle with Raki, a boss near the end of the game. If Raki is not defeated before the battle's third phase then the boss will perform an attack that causes the PlayStation 2 to run out of memory and freeze. Another issue was that NIS America included the option to select between the game's Japanese and English voice tracks but, in order to fit both options on one DVD, a large number of voiced scenes were removed from the Japanese track.

A fan-community re-localization project was started shortly after Ar Tonelico II's US release, called Project Metafalica, that set out to re-translate the game and fix all of the numerous problems with the official localization. The patch was eventually released in 2016 and contained a long list of changes and improvement's to the game's script. 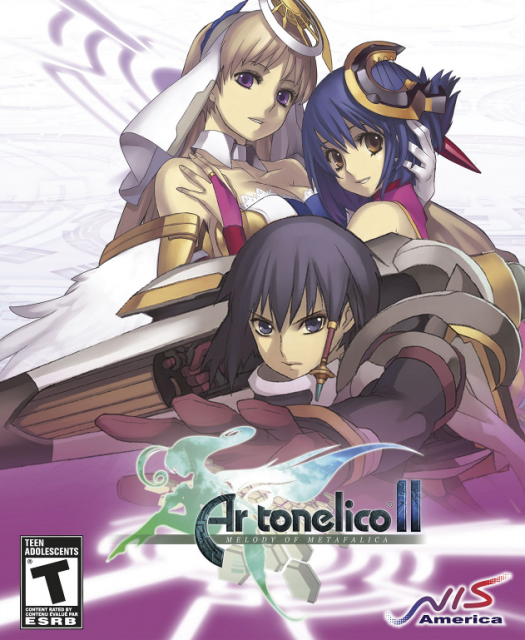