The first expansion for Galactic Civilizations II adds special abilities for each race, mineable asteroid belts, a revamped espionage system, and much more.

Having realized that their digital distribution system was significantly more profitable than selling through traditional retail outlets, developer Stardock elected to focus on selling Dark Avatar to owners of the original game through the "Stardock Central" update manager they were already using to acquire updates.  They did, however, release a compilation pack to retail stores which included GalCiv2 and Dark Avatar so that new players could easily acquire the full suite.

Dark Avatar includes a long list of miscellaneous balance tweaks, AI enhancements, graphical improvements, and cosmetic streamlining.  Most of them were enacted to make room for several major additions to the gameplay mechanics.

In an attempt to diffuse the mad colony rush that characterized the early phases of nearly every game of GalCiv2, a percentage of planets in Dark Avatar feature harsh environments which require the completion of specific research before they can be successfully inhabited.  There are five different varieties, including radioactive, toxic, barren, aquatic, and heavy gravity worlds, and each type has two levels of research that will make it available for colonization.  The first allows a settlement to operate under the burden of a 50% penalty to all productivity, while the second makes it a fully functional member of the empire.  Without the requisite technologies, colonies on hostileplanets can be conquered or flipped by superior culture but will remain completely unusable until the appropriate research is completed.

Harsh worlds ironically often have attractive Planet Quality ratings, but the advanced research necessary to take full advantage of them is expensive enough that they may remain unclaimed until the middle stages of the game.  On the other hand, empires that discover several nearby worlds of the same type have a chance to focus their research and gain access to them before anyone else, and some races have a natural tolerance to certain environments.

Each of the twelve preset races now has a different Super Ability to help further differentiate their unique strengths, while custom races are free to choose one at the start of the game.

Prior to Dark Avatar, espionage was an abstract idea where money spent on an enemy civilization would eventually yield statistical data on their relative strengths and weaknesses.  The expansion pack revamped the system so that espionage funding goes directly into training individual agents who can be used to completely shut down structures on alien worlds, or to neutralize enemy agents operating in their own colonies.

Many solar systems now have asteroid fields which can yield bonus resources to nearby colonies by using specially equipped vessels to establish mining platforms.  The benefit from these facilities drops of sharply with distance and they can be easily subverted by alien cultures, but by upgrading them into more advanced forms, they can eventually turn a backwater world into a manufacturing powerhouse.

In order to increase the value of asteroid mining and colonial power plants, a new planet-side structure, the base output of all factory structures was slightly reduced.

In addition to the random events found in the original game, Dark Avatar introduces the option for unpredictable Mega Events which deliberately shake up the balance of power in the current game.  Some examples include:

These events are intentionally intended to destabilize the course of the game, but can be disabled during the setup phase of a new game. 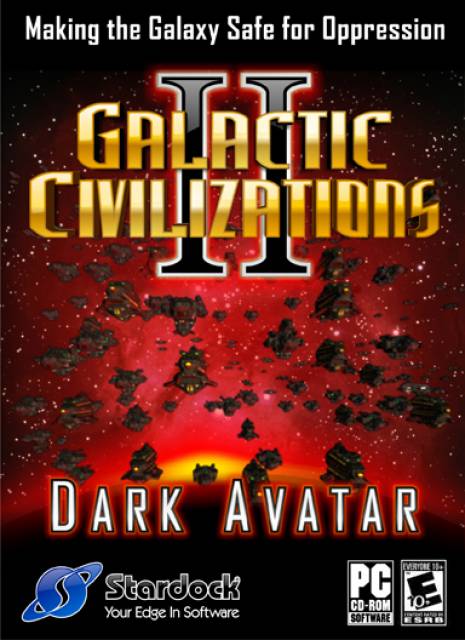