This football simulation CD game for the TurboDuo was the first and only installment of the Madden franchise on the TurboGrafx systems.

John Madden Duo CD Football is an adaptation of EA's famous football series, developed and published by Hudson for the TurboDuo, the CD-enhanced late model TurboGrafx-16. The gameplay is functionally identical to John Madden Football '93 but with the controls configured differently to suit the TurboGrafx controller. The game also benefited from its CD format, including voice clips from John Madden himself and small video sequences that played whenever something significant happened, such as a touchdown, first down, injuries, etc.

Electronic Gaming Monthly gave the review scores of 7,8,7 and 8. Martin Alessi, who gave the game an 8, wrote, "...the game play is smooth and the graphics are well done, although the players look more cartoony. The addition of the digitized sequences for the intro and the referee are fantastic. The sound effects are live, as is the cheering of the crowds". 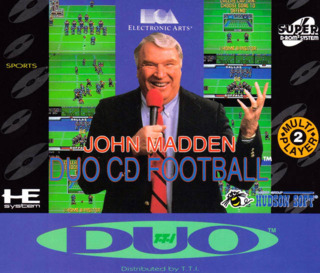