An updated port of the indie PC fighting game Melty Blood, and the first in the series to be released in arcades.
PlayStation 2

Melty Blood: Act Cadenza is a horror-fantasy 2D fighting game developed by Ecole (along with Soft Circle French-Bread and Type-Moon) and released by Sega for arcades (using Dreamcast-based Sega NAOMI hardware) exclusively in Japan on March 25, 2005.

An updated arcade port of the 2002 doujin game Melty Blood.

Along with an updated "Ver. A" revision on August 5, 2005, which made numerous balance updates, the game received a console port for the PlayStation 2 on August 10, 2006. Released exclusively in Japan by Ecole, the PS2 version includes further balance tweaks (which can be disabled for the authentic arcade experience) and new unlockables.

The PS2 port was later used as the base for the arcade version's updated "Ver. B" revision on December 23, 2006. This version also adds a fifth button as a shortcut for certain commands and made the boss character White Len playable. This version was later ported to the PC on July 27, 2007. The PC version, also released by Ecole, adds further changes while including new features (such as tag-team).

Much of the gameplay from Melty Blood (as of its Re-ACT expansion) remain intact. However, there are a few differences:

Unlike other games in the series, Act Cadenza has the romanization of Japanese names reversed. 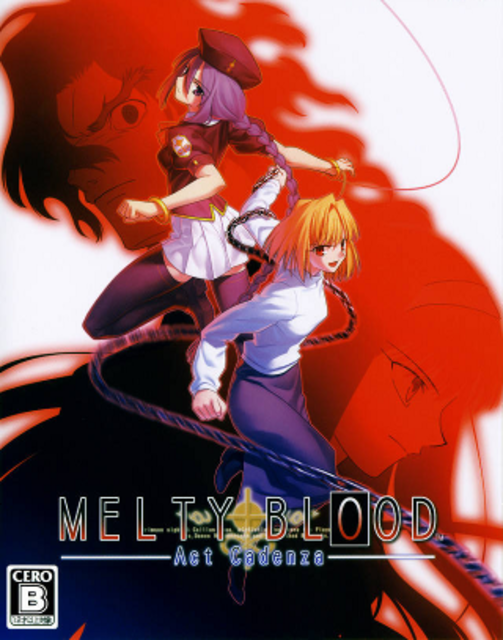