The mysterious Mr. Acme has arranged for seven professional assassins to fight each other to the death in this unique 2D arcade fighting game (seen as the precursor to other popular platform-based fighting games).

The Outfoxies is a 2D comedic crime-themed weapon-based platform-fighting game developed and released by Namco for arcades (using their NB-2 hardware) in late 1994.

Seen as a precursor to other side-scrolling platform-fighting games (such as the Super Smash Bros. series), Outfoxies pits assassins in one-on-one matches set in large unique arenas (which zoom in-and-out on the screen as players navigate it using traditional platforming mechanics) with a variety of limited-use weaponry that can be picked up.

The story involves seven professional hitmen hired by the mysterious "Mr. Acme" to assassinate wealthy art collectors. After the deed is done, Mr. Acme arranges for them to kill each other to avoid having to pay their fees.

Gameplay in Outfoxies is a side-scrolling 2D fighting game which features large arenas that up to two players fight to the death in. Players have a number of options when it comes to traversing the arena, such as climbing stairs, dropping down floors or jumping gaps. Players are given a large arsenal of weapons to kill each other, including guns and swords to less conventional weapons such as fans or pies. Each weapon has a limited use and will either run out of ammo, or break over time.

The environment reacts to the player's fighting which can create hazards: glass tanks can be broken, causing water to blast out and send players across the room. The game's plane stage will shake or rotate violently if the players use explosives and the train level features tunnels that can knock the player off the top of the train if they don't duck in time. Each level has a time limit and the arena will deteriorate throughout the match, one such level takes place in a skyscraper, an explosion early in the match will cause the building to slowly fall apart, causing floors to collapse sending players down several floors though a restaurant all the way down to the lobby.

The soundtrack to The Outfoxies was composed by Masahiro Fukuzawa and published by Victor Entertainment on January 21st, 1995 as a part of Namco's 'Sound Express' series. 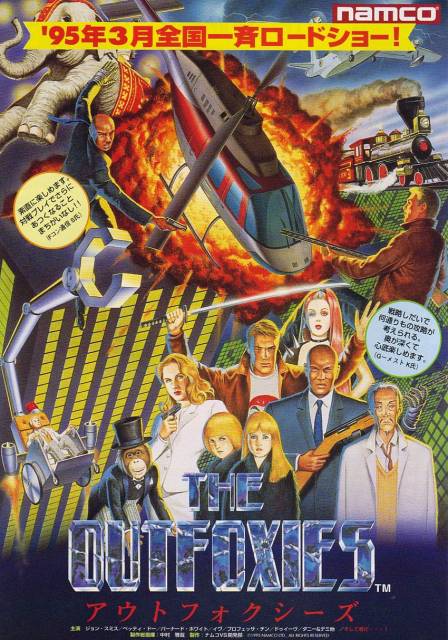