NCAA Football 08 is the 11th installment of the franchise. This version sported a new engine and control scheme, allowing for a different gameplay experience than previous iterations.
PlayStation 2 Xbox 360

NCAA Football is a college football based videogame created by EA Sports. Before the game was released, EA held a vote on the 07 version of the games website allowing fans of the series to vote on what extra feature they would like to see in the Playstation 2 version of the game. Fans were given the choice to vote on: in-game saves, medical red shirts, summer workouts or a lead blocker feature.  The fans decided in the end they wanted medical red shirts and this was then featured in the "Dynasty Mode" feature and was available on ALL platforms instead of just Playstation 2.

Differences between 360 and Playstation release -

There are a number of differences between the release of the game on the two consoles. The 360 version of NCAA 08 runs at 60 frames per second, making the game look a lot smoother and realistic in animation terms. The PS3 release of the game remains at just 30 frames per second (the same as NCAA 07). Despite being 30 frames behind the 360, PS3's release still features most of the animations and actions found on its rival console.

The game features 115 stadiums, which is a great comparison to the 07 release of the game which featured just 40 stadiums. The number of stadiums is not the only thing to change, this game runs on a different animation system and gameplay engine, giving the game a clearer look and also opened to new actions in game for the player, those including: side-line catches and gang tackling. All of which give the game a more realistic and simulation feel. Seening as the looks of the game were improved, so is the control scheme. Blocking control's featured on the best selling Madden games have been incorporated into the 08 release, branching the audience of the game. The next gen consoles also feature a motivation system, meaning players will feel better if they do well in a game. Benefits of this being that it will boost the players attributes and will also cause him cheer on his team mates to boost their momentum. Dynasty Mode is in keeping with the previous game and allows players to export their NCAA players to be exported to Madden 08.

When the player creates a new player and highschool on the 360 and PS3, the game begins at the state championship playoffs and allows the game to decide which caliber the Campus Superstar will be put into (the higher the caliber, the higher the players stats). Throughout the game mode the player will be offered scholarships to different school depending on how well do. The 360 and PS3 versions allow the player to focus just on their Campus Superstar and not control the whole team, however this is unchanged on the Xbox and Playstation 2 version.

Other Features of the Game -

Award Tracking - A cabinet called "My Shrine" is available to the player to allow them to track their unlocks, trophies and accomplishments throughout their playtime of the game.

EA Sports announced the games cover star would be Jared Zabransky on March 2nd 2007. The main reason for this being for Zabransky's outstanding year with the Boise State Broncos. 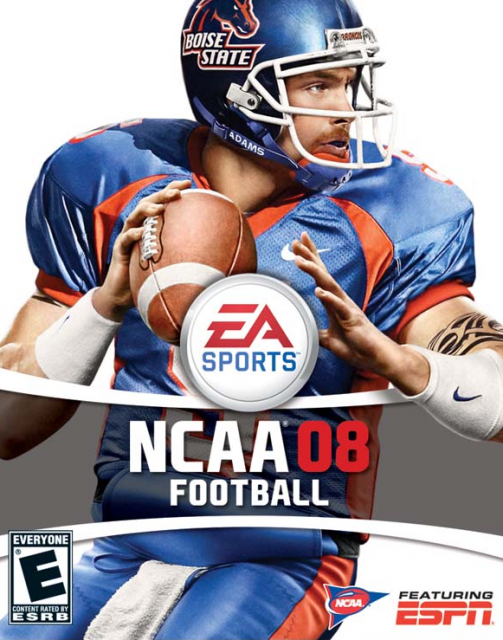