A game by PopCap Games, similar to Breakout and Pachinko machines.

Peggle Deluxe is a 2D game from the popular website and developer PopCap Games. A port of the game was developed for the Zeebo by Vega Mobile.

Peggle combines game mechanics from the Japanese casino game Pachinko and the 1976 Atari arcade game Breakout. The gameplay of Peggle consists of players firing balls from the top of the stage at multi-colored pegs. When a ball contacts a peg, said peg lights up and is added to a combo meter. As the ball continues to bounce around the play area and hit more pegs the player receives more points. A turn is ended when the ball either falls through the bottom of the stage, or is caught by an osculating bucket and thus saved for reuse.

Essentially the game of Pachinko, Peggle asks the player to clear out all the orange pegs on any one board. Blue Pegs exists to aid your score, and there are a couple other colors as well (see below) To complete each stage you get 10 balls, however there are a couple ways earn extra balls. You could either A) Earn enough points in one shot B) Hit your ball into a moving bucket at the bottom of the screen or C) a combination of both. In addition if your ball does not hit a peg it will trigger a coin toss that could result in you getting a redo.

In Peggle Deluxe there are four different types of pegs. The orange peg is the object peg. In most instances a player will need to strike all oranges pegs to advance. The blue peg is a point peg, each blue peg you hit will add to your combo and score. Green pegs are power-up pegs. These pegs allow you use of the selected characters ability. Finally purple pegs are score point boost pegs that increase the number of points you get for each peg that the ball contacts after hitting the purple one.

Peggle Deluxe has 4 modes of play. These modes are:

Adventure mode is where most new players will start learning the game's mechanics and is set up to take you though each of the game's boards and power ups. Adventure mode is divided into stages and levels. There are 10 stages and 5 levels to each stage. The object of level in Adventure Mode is simple, you must use your balls to hit all of the orange pegs, and you have ten balls to complete this task. Before each stage you are introduced to a new character via a small intro paragraph and picture. Each character has their own unique power-up that can be used to help players completed the levels.

The stages and levels are as follows:

Quick Play mode allows players to replay levels that they have previously unlocked though adventure mode. Quick play gives players the ability to use any power up on any stage. High scores are show for each level which promotes competition between players.

In Duel Mode Players take turns shooting balls on the same level. The object is to score more points than your opponent, be it computer or real. Players are also penalized if they do not hit an orange peg on their turn.

Challenge Mode tasks the player with completing various goals that are different than Adventure Mode Goals. These goals are set on the same normal Adventure mode levels.

The Adventure Mode Goals are as follows:

Once a player has completed all the challenges they are crowned the Peggle Master.

There are ten playable characters in Peggle, each with their own themed maps and special powers, which are normally activated when hitting a green peg.

Peggle Deluxe has been very well received by the gaming press. Critics cite its addictive nature and "feel-good" moments as strengths. It has a Metacritic score of 92, which is extremely high for a cheap, download only game. Even the usually harsh Yahtzee said that "I started playing around noon and emerged from my room sometime later to find the authorities had declared me legally dead" in reference to how addictive the gameplay was. PC Zone Magazine called Peggle "Addictive and happy", which seemed to be a pretty good sum-up of the general reception. 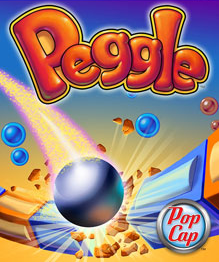