Deadline was one of the first interactive fiction mysteries ever published. It built on earlier Infocom games with a much-improved parser and the element of time-based puzzles.

Deadline was the third game released by interactive fiction pioneers Infocom. It was characterized by the company as being of "Expert" difficulty.

Deadline was a major breakthrough for the company in several respects.

The game designer/programmer (or as Infocom called it, "implementor", or "imp") for Deadline was Marc Blank. Blank was a co-founder of the company, and a collaborator on Zork. Blank's medical school background helped him create convincing medical-related material for Deadline.

The game was originally titled "Was It Murder?" Infocom's advertising agency, Giardini/Russell, suggested the final title. Giardini/Russell would become integral to Infocom's success, deeply involved in the production of the "feelies", and in creating compelling advertising and a distinctive "look and feel".

A locked door. A dead man. And 12 hours to solve the murder.

Wealthy industrialist/philanthropist Marshall Robner is dead. It appears to be a suicide... the door to his room was locked, and the lab results indicate an overdose of the antidepressant medication which he had been prescribed. But, since Robner was about to submit major changes to his will, Robner's lawyer wants to confirm that conclusion beyond any doubt. The player plays as a detective from a nearby town who is called in on the case.

The player collects evidence by finding clues and interrogating suspects. Sergeant Duffy can be ordered to bring objects to the police lab for fingerprinting or analysis. The object will then be unavailable for about a half-hour, until Duffy returns with the lab results.

At any time, the player can order the arrest of a suspect or suspects, which will end the game. However, if the evidence is insufficient -- or, obviously, if the suspect or suspects are in fact innocent -- then the ending will be negative. Additionally, the game's clock progresses as commands are entered. If 12 in-game hours have passed without an arrest, the game also comes to a negative ending. There is further danger if it becomes clear to the murderer or murderers that sufficient evidence against them has been marshalled, and yet they are not promptly arrested. Thus, Deadline became the first Infocom game with multiple possible final endings.

There are timed events, such as phone calls and mail deliveries, that will happen in the same time and place in every game. In between this and the 12-hour "deadline", time is a very real element in Deadline, as opposed to Zork where it was usually irrelevant. This timed-event structure also means that one will probably have to replay the game repeatedly in order to discover these events, which players may or may not enjoy.

Deadline pioneered Infocom's tradition of including collectibles (or, as they were referred to, "feelies") within a game's packaging to help set the mood of the game. 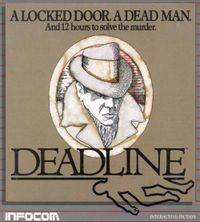