Sega's Yakuza series moves to the PlayStation 3 for its third installment, bringing all the comically brutal beat-em-up gameplay, Japanese RPG storytelling and various mini-games with it.
PlayStation 3

Yakuza 3 is an action game developed by Amusement Vision, and once again it follows the series lead character Kazuma Kiryu. It was released February 26, 2009 in Japan, and March 9, 2010 in the U.S. and March 12, 2010 in Europe. Sega has also been releasing free downloadable content (exclusive to Japan) for the game as of March 5, 2009. These downloadable packs contain 29 new costumes for Kazuma, two-player modes for some of the minigames (including darts, golf and billiard), 8 packs of new items and more. Most of this DLC is made available in Western releases through redemption codes packed into the game or via pre-order bonuses with specific retailers.

The Yakuza wars are spreading over to the tropical paradise of Okinawa. After leaving his last base in Kamurocho, Kazuma Kiryu went to Okinawa and opened an orphanage named Sunshine Orphanage (U.S.) / Asago (Japan: translated to a flower called Morning Glory) with Haruka (from the first Yakuza game), a young girl who acts as his assistant. Together with the children they have taken in, the two slowly let go of the violent lives they have led prior to their arrival.

However, the happy days are short lived for the Yakuza are tightly connected with the Japanese government. A shady deal that involves the land that has Kazuma's orphanage on it. After a mysterious man resembling Kazuma's supposedly deceased father shoots Daigo Dojima, the current chairman of the Tojo Clan, Kazuma returns to Tokyo once again.

The two main areas you will be exploring are Ryukyugai in Okinawa and Kamurocho in Tokyo. They are both fictional areas, although based on the real life locations of Naha's Makishi and Tokyo's red-light district, Kabukicho . They contain lots of activities to enjoy such as bowling alleys, batting cages, noodle houses, bars, and convenience stores. The main gameplay is brawling. Throughout the game Kazuma earns experience (through combat, eating and sub-stories) and will learn new moves and techniques as he becomes more and more powerful. Also, Yakuza 3 adds a change to random battle load sequences using a streamlined transition from exploring than jumping right into combat causing the player to stay with the action without a major load time or blank screen. This also is utilized in the new Chase Sequences, where Kazuma is forced to attack and force down a fleeing target in order to continue the story.

Yakuza 3 contains many key features that are inherent to the series:

This is also the first Yakuza title to include Playstation Trophy support, adding a total of 45 trophies including the series first Platinum.

Kamurocho is a fictional district of Tokyo that serves as a major setting of the Yakuza series. It is regarded as Tokyo's "Sin City" district, and is home to such activities as underground gambling operations, loan sharks and similar illegal activities as well as more legitimate adult establishments including host and hostess clubs, massage parlors and nightclubs. It is also a district heavy with the influence of the yakuza, who frequently clash over Kamurocho's control. At the heart of Kamurocho is a towering skyscraper called the Millennium Tower, which serves as a key location to many events throughout the series.

This game requires a 5 GB installation on the PlayStation 3.

It currently holds an 80 average on Metacritic.

According to VGChartz, the game sold approximately 48,164 copies in North America in its first week; 76,535 total after 3 weeks. Some point to the fact that Sega chose to release the game on the same date as the Western release of Final Fantasy XIII as part of the reason for low sales.

The US release of Yakuza 3 includes a package of four different DLC bundles, already included in packaging.

Sega has also released an exclusive set of DLC included as a Gamestop pre-order gift. This package is now available for purchase in the Playstation Store, they contain: 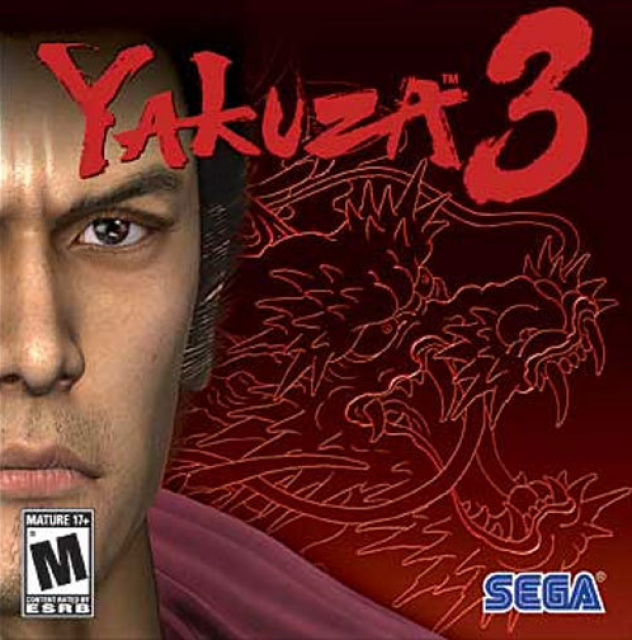