Roger Clemens' MVP Baseball is a baseball game from Sculptured Software (a. k. a. Acclaim Studios Salt Lake City). It uses the name and likeness of starting pitcher Roger Clemens back when he was with the Boston Red Sox. The Japanese release of the game dropped the license and was simply released as MVP Baseball.

The games uses fictional team and players (besides Roger Clemens) with 26 teams to choose from overall, and the player can select an exhibition mode for one-off games or the long season mode which contains 162 games overall. Rather than saving the player's progress, the game provides a password system to allow the player to resume the season from where they left off. 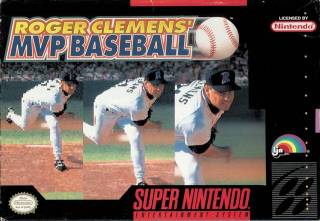