Embark on an adventure with characters from different walks of life, all destined to unite with you, to save the world.

Dragon Quest IV: Chapters of the Chosen is a Nintendo DS remake of the NES classic from Square Enix. The game features updated graphics, improved sound and a new translation (the engine is a slight upgrade of a PS1 remake only available in Japan). Dragon Quest IV features a familiar story of a band of heroes who come together to save the world and is split into five distinct chapters; each one is told from the perspective of a different character.

Ragnar makes his way into the woods, finding nothing but a well. After a voice beckons him to jump, Ragnar finds himself in a long passageway, split in several directions. The same voice leads him through the tunnel until he arrives in a small cave with a single treasure chest surrounded by a small river of water. Inside are the Flying Shoes, a key item in Ragnar's quest for the miss ing children. Within the cavernous tunnels, he also meets up with Healie, one of the jellyfish-like Healer creatures. Healie wishes to join Ragnar's quest in hopes of one day becoming a human. Healie makes a valuable addition to Ragnar's solo-quest, as the Knight Captain himself knows no magic and relies solely on medicinal herbs to heal himself. Healie is the first of many combative NPCs within the story.

Upon using the flying shoes, Ragnar is sent immediately to the abductor's tower. While the two scale the tower, Ragnar learns from a dying soldier the plot to find and kill the "Legendary Hero" while he or she was still a child so that the "Ruler of Evil" may be resurrected. Thus the kidnappings. Upon the destruction of Saro's Shadow and his Giant Eyeball cohort, Ragnar rescues the captured children. After returning them to Izmit Village, Ragnar meets with the King of Castle Burland. He requests to begin a new quest, to find the "Legendary Hero" and thwart the plan to resurrect the "Ruler of Evil". The King gives Ragnar his blessing as Chapter One ends.

The tomboy Tsarevna Alena (originally Princess Alena) goes on a journey to test her strength, accompanied by her two allies Borya and Kiryl. Bored of palace life and eager to travel the world, she takes off (to the dismay of her father and palace officials), and the palace magician and priest are left with no choice but to tag along.

In which Taloon goes on his journey to become the world's greatest merchant. This chapter is played unlike the rest of the game; instead of conquering dungeons, Torneko Taloon buys equipment low and sells high to conquer the market. One way Torneko builds up his initial inventory is to collect weapons and armor left behind by monsters with whom he does battle. Each objective is to reach a set amount of gold.

Chapter 4: The Sisters of Monbaraba

The twins, Meena the younger sister and a fortuneteller, and Maya, a dancer (originally Mara and Nara), seek revenge for their father's death. The gruesome murder was done by Balzack, who found out that their father, an alchemist, had discovered the secret of evolution.

Chapter 5: The Chosen Ones

The Legendary Hero sets forth to save the world with the help of the rest of the cast. Meeting with each of the party members seen in previous chapters one by one, the Hero will also slowly learn of his true origins and is also given the opportunity to found his own town.

In this bonus chapter--which starts right before the final battle of Chapter 5--the Chosen Ones resurrect Psaro's long lost love Rose and take her to him. Psaro then comes back to his senses and changes back to his original form. He goes on to join the group of the Chosen Ones to defeat the true final boss, Aamon, who was the one behind Rose's death all along.

Dragon Quest IV: Chapters of the Chosen's gameplay is mostly classic Dragon Quest fare, but it has a number of unique features that separate it from other first-person RPG's. These include:

Wagon - Allows the player to choose wich characters fight in battle. A series first, the wagon may also be found in V and VI.

Casino - A building full of mini-games and monster battling, the Casino is a nice respite from a hard day's work of saving the world.

Small medals - Finding these nets the player rewards if they know what to do with them.

Some features have been seen in past games, while others are exclusive to the IV, V and VI Dragon Quests (commonly referred to as a trilogy).

In early 2009, the NPD revealed that Dragon Quest IV had sold 76k since its release 4 months prior, suggesting that it had failed to attract the casual crowd. Otherwise the game was well received, and holds a respectable 80 Metascore garnering generally positive reviews. Many sources deemed it "a must own for any JRPG fan." Pros commonly cited were the beautiful dual-screen presentation and interesting narrative structure, though some felt the exposition of the game lacked variety and challenge. 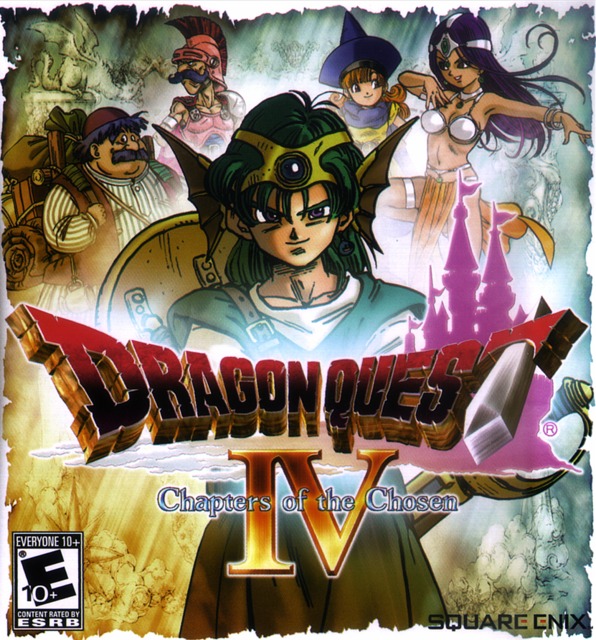