Bard's Tale is a critically acclaimed party-based roleplaying game based loosely on the Dungeons & Dragons rule set, with first-person navigation and text-based combat.

All is not well in the city of Skara Brae. The servants of Mangar The Dark roam the streets and infest its buildings, terrorizing its citizens and bringing the once thriving city to its knees. The player's band of stalwart adventurers must seek to rid the city of this blight, by exploring all manner of dungeons, castles and towers, and defeating Mangar and his minions once and for all.

Unlike the city, encounters in the dungeons and castles are with as many as four different groups of enemies. While only the first two groups are within melee range, other groups can still attack at range, and even advance between rounds. Defeated enemies will leave behind chests containing gold and experience, as well booby traps periodically.

The four character code needed to cast is given after the spell name. The spell's cost in spell points is in parentheses after its description. Note that its takes two experience levels to attain a new spell level.

Various ailments can afflict the characters during their adventuring. None are beneficial, and all can be healed at the local temple.

A compendium of monsters is being compiled in the Creatures image gallery. Most are virtually the same apart from their image, but the following are notable.

Pool of Radiance Wizard's Crown Curse of the Azure Bonds Wizardry: Proving Grounds of the Mad Overlord Might and Magic: Book I Dragon Wars Pools of Darkness Secret of the Silver Blades Legend of Faerghail Might and Magic: Clouds of Xeen The Bard's Tale Trilogy Death Bringer Etrian Odyssey III: The Drowned City Mordor: The Depths of Dejenol Wizardry: Labyrinth of Lost Souls Dai Meiro: Meikyuu no Tatsujin Murkon's Refuge The Sword of Hope II Dungeons of Daggorath Child of Light Akalabeth: World of Doom Dungeon Magic: Sword of the Elements Malevolence: The Sword of Ahkranox Nox Archaist 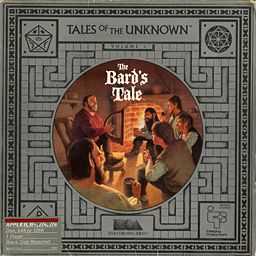