A monster battling RPG released in two versions. It was released to coincide with the then-airing Medabots anime.
Game Boy Advance Wii U

Medabots is a 2003 role-playing game developed and published by Natsume. The game focuses on assembling "Medabots," combat-enabled machines consisting of a skeleton-like "Tinpet," four body parts, and a "Medal" which serves as the Medabot's AI. It was released in two versions: Rokusho, in which the titular Medabot uses the melee-centric Kuwagata medal, and Metabee, which features the projectile-friendly Kabuto medal.

Medabots is a remake of Medarot 2 and is, to date, the only Medabots RPG to be released outside of Japan.

10-year-old Ikki Tenryou always aspired to be a Medafighter, but never had a Medabot of his own. This changes one day, as he is sent to a store to buy Spice-A-Roni but instead ends up purchasing either Rokusho or Metabee. After a Kuwagata or Kabuto medal is given to Ikki by his father, his Medabot activates, allowing him to finally engage in Robattles. He, along with his friends Erika, Koji and Karin, embark on many adventures, most of which involve the villainous Rubberobo Gang.

As mentioned before, each Medabot consists of a Tinpet, four Medaparts (Legs, Left Arm, Right Arm, Head), and a Medal. Tinpets are essentially skeletons that allow you to create a Medabot; they are classified as Male or Female, which determines which parts can be equipped onto it. Medals contain the Medabot's base stats and, later on, their Medaforce abilities. The body parts control the Medabot's battle actions; Legs have an influence on the Medabot's speed and evasion, while the other parts determine the attacks that the Medabot has at their disposal. Each part has an HP value, which represents how much punishment it can take in battle before it is destroyed.

Battles consists of up to three Medabots per Medafighter, and end when a Leader Medabot's Head part is destroyed or time runs out (the victor is then determined by the sum of their parts' HP).

Each Medabot chooses to use either their Head, Left Arm, or Right Arm (they may also charge their Medaforce Gauge, which will be covered later). Each part has a startup time (Charge) and cooldown time (Radiation) associated with it; this is represented graphically by the Medabot rushing to the median of the arena, performing its chosen action, and then returning to its starting position. The targeted enemy Medapart is chosen at random; typically the Legs are attacked first, followed by the Arms and finally the Head, but occasionally this pattern will be broken.

Each Medabot also has their own Medaforce Gauge, which increases by taking damage or using the "Charge MF" option. When full, the Medabot can perform their Medaforce. The Medaforce is like any other combat action, except much more potent and not tied to a specific Medapart.

Medabots is, for the most part, identical to Medarot 2; however, certain features and overall presentation decisions from Medarot 3-5 are implemented.

Like Medarot Navi, the game uses multiple sprites with "joints" to produce smooth battle animations regardless of the equipped Medaparts. HP is listed for each Medapart, unlike Medarot 2 which only lists the Medabot's total HP. "Rotation," which allows the player to program a battle pattern into their Medabot, returns. Music is a mix between old and newer tracks, and multiple battle BGMs are included. Medabots are named by their Medal instead of their Tinpet, a change that was introduced in Medarot 3.

On the other hand, Medarot 5's Medaskills are not carried over. Additionally, not only do the Medabots from Medarot 2 return, some are even reverted to their original Medarot version.
Robopon: Sun Version Custom Robo Arena Robopon 2: Cross/Ring Version Joy Mecha Fight 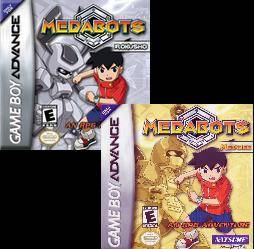