Japanese wrestling game that features a large roster and the trademark AKI grappling system. Introduced a MMA fighting style that brought combos and a mount system to the game.

The sequel to Virtual Pro Wrestling 64, and released only in Japan. The title translates to Royal Road Succession; the name of the career mode in the game. The fifth wrestling game developed by AKI Corporation. Contained many improvements from previous titles that would be featured in AKI's final Nintendo 64 wrestling game WWF No Mercy. Some features, such as creating masks in edit mode and the MMA style grappling system, would not be carried over to WWF No Mercy.

Virtual Pro Wrestling 2 carries the All Japan Pro Wrestling license, and features 21 wrestlers from their promotion. The rest of the characters included in the game are based on other real promotions and wrestlers, but due to copyright have fake names and appearances. This is common among other Japanese wrestling games. You can identify who the other wrestler's are by their unique moves and taunts, and the edit mode contains each piece of ring attire you would need to recreate their actual likeness.

In total, there are 98 wrestlers in the game, 23 of which have to be unlocked. There is also 16 original character slots you can use to edit and create your own wrestlers, bringing the potential total of wrestlers in the game to 114. This game has the largest roster of all of AKI's wrestling games. In comparison, WWF No Mercy would have 64 wrestlers available.

Exhibition mode is where you can setup your Single, Tag-Team, and Three Way matches, as well as a Battle Royal and Elimination.

In a singles match you can choose between a standard Pro Wrestling Rule Set or Mixed Martial Arts rule set. The Mixed Martial Arts set was included to go along with the new MMA grappling system in the game. With this set you can customize how you are awarded points and how the match can be won. Points can be awarded through takedowns, knockdowns, and rope escapes. You can set the amount of rounds between 1-15, have the match end by submission or when someone earns a set amount of points. This rule set can also be used in Elimination mode.

In Battle Royal, you can choose between Random or Team Battle settings. With Random, you select which four wrestlers begin the match, and afterwards each entrant is chosen randomly. In Team Battle, you select how many wrestlers will belong to each of the four teams. This match type is at it's best when you have four people playing, because each person can keep entering the battle royal with their wrestler(s) of choice, until their entire team is eliminated.

You choose two teams that compete against each other in a series of single matches. The damage done to the character that wins a match carries over to the next. The series ends when each member of one team is eliminated. A limited version of this mode is featured in WCW vs. nWo: World Tour, and is called WCW vs. nWo.

The cage match is absent from the game, first featured in WWF Wrestlemania 2000, most likely replaced by the Elimination match because there are not a lot of cage matches in Japanese wrestling. When they are done it is usually as a Cage Death Match with explosives and barbed wire. The Fire Pro Wrestling series features these match types.

Royal Road Succession is the career mode for Virtual Pro Wrestling 2. It is very similar to Road to Wrestlemania in Wrestlemania 2000. The goal is to complete a full tour of the All Japan Wrestling schedule, where instead of Pay Per Views it is highlighted by tournaments, special match types, and championship bouts. The belts you can win during the mode are the Triple Crown Championship (which are three different titles unified as one), Unified World Tag-Team Championship (which are two different tag titles unified as one), and the All Asia Tag-Team Championship. Some of the special events you participate in are the Champion Carnival (a round robin style league tournament, which gives you a shot at the Triple Crown if you win), Real World Tag League (AJPW's prestigious tag-team tournament, also done as a round robin style) and a Battle Royal (another yearly event held by AJPW).

Many of the hidden wrestlers and items in the game can be obtained through Royal Road Succession mode. Certain items and characters can only be unlocked by using specific wrestlers in RRS, encouraging multiple playthroughs.

League Mode is where you can set up a round robin style tournament, a feature not seen since WCW vs. nWo World Tour. League tournaments are very common in Japanese wrestling promotions, offering wrestlers an opportunity to compete multiple times, earning points for their efforts. You can choose up to 12 participants in either a singles or tag-team format. A wrestler is awarded two points if they win, one if there is a draw, and zero if they lose. Whoever has the most points in the end wins. If there is a tie, then a final match takes place to decide the winner.

Tournament mode is where you can create your standard elimination style tournament. In Wrestlemania 2000, this was represented as The King of the Ring mode. You can choose up to 16 participants in the tournament, either in a singles or tag-team format.

Rally mode is where you can customize your own event, similar to Pay Per View mode in Wrestlemania 2000. You can create as many matches as you like, and either play them yourself or let the computer simulate the matches, with the exception of title matches. There are some hidden items that can be obtained by holding specific matches as part of a Rally event.

Ranking mode is similar to tournament mode, except you can enter individual names to represent yourself as opposed to the wrestlers.

Edit Mode is where you can customize every wrestler in the game, as well as create up to 16 new wrestlers. With an Nintendo 64 memory card, you gain an extra 16 slots that you can swap in and out as well.

An addition here not featured in any other AKI wrestling game is the creating and editing of masks. There are also various outfits, items, masks and moves that can be unlocked to use throughout the rest of the game. The edit mode includes every piece of attire you need to correctly change the non AJPW wrestlers appearances to reflect their actual likeness.

There are five arenas you can select for your matches in the game, each based on real world venues.

Dome Road (Tokyo Dome with ramp, must be unlocked)

For each mode and match type you have the option of putting a title on the line. You can create your own titles using the belts in the game which are based off real and existing championships. Initially there are eight belts you can choose from, but you can unlock 15 more bringing the total to 23. This is similar to Wrestlemania 2000, but this feature would be scaled back in WWF No Mercy, only allowing you to defend the WWF titles without renaming them.

These are all the wrestlers available in the game, listed in the order they appear. 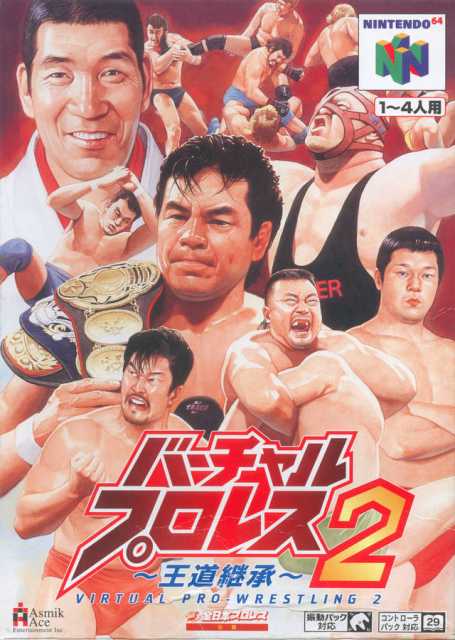