Though not the first Konami game to feature a character based on historical Japanese figure Goemon Ishikawa, which would be the Arcade platformer Mr Goemon, Ganbare Goemon! Karakuri Douchuu is the first Ganbare Goemon game in a long-running series known in the West as The Legend of Mystical Ninja. The game establishes many of the most identifiable aspects of the series: The top-down, 3/4 perspective; Goemon's use of a pipe and a yoyo as weapons; buying items in stores with found money, such as armor and health replenishing items; the 3D maze sequences; and the "lucky cat" Maneki Neko power-ups that increase the power of Goemon's weapon.

The goal of each stage in Karakuri Douchuu is to find three passes. These allow Goemon to pass the gates to the next area of the game and can be found in secret tunnels, in the 3D mazes that can be reached from some shops or purchased in said shops for a considerable fee. All the while, Goemon needs to avoid or defeat enemies such as samurai, policemen, ronin, ninjas and oni.

Though an obvious progenitor to the series, it wouldn't be until the second game - which introduces Ganbare Goemon's trademark bizarre sense of humor and Goemon's partner Ebisumaru - that the Ganbare Goemon series becomes whole. 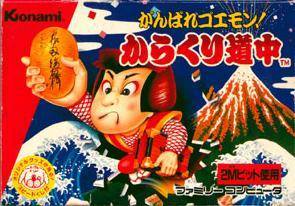