osu! gameplay is based on a variety of popular commercial rhythm games. While keeping some authentic elements, osu! adds huge customisation, online rankings, multiplayer and boasts a community with over 300,000 active users! Play the way you want to play, with your own music, and share your creations!

osu! is based off of the “Osu! Tatake! Ouendan!” (Elite Beat Agents in the US) games that were released in Japan. Instead of a stylus, however, the player uses a mouse to play. It contains many features that were not in the original games, and some new ones as well, including multiplayer, Beatmap (level) creation, and in-game chat.

Gameplay in osu! is largely similar to that of the DS title “Osu! Tatake! Ouendan!” A song is played, and the player must perform certain actions in accordance with the beat. The elements that the player must interact with are numbered, indicating which should be hit first.

There are three actions: Hit Circles, Sliders, and Spinners (all of which are present in the DS game).

For Hit Circles, the player simply needs to click it the circle right when the shrinking circle on the outside matches up with it. These are usually in-time with the background beat or vocals. Depending on when the circle is clicked, the player can either get 50, 100, or 300 points. A Hit Circle adds one point to the player's multiplier.

For a Slider, the player clicks it just like a hit circle, but then drags the held mouse along the predetermined path of the Slider. Sliders are usually in-time with single phrases and verses, or held notes. Just like a hit circle, the player can get a range of scores for completing a Slider, from 50 to 100 to 300. A point is added to the player's multiplier every time a “tick” is crossed (white dots in the Slider's path) in a Slider.

In a Spinner, the player must hold and move the mouse in a circular fashion. A meter on the side shows progress through the Spinner, and if the player completes the Spinner fast enough (before it's supposed to end) bonus points will be given in increments of 1000 for every spin. There is no score range for a Spinner. If it's not complete, it will count as a miss.

The game has 4 preset “difficulties”, but they are only placeholder, as the Beatmap creator chooses which one is appropriate for his/her Beatmap. Their standard names are "Easy," "Normal," "Hard," and "Insane," but they can also be given custom names to match the song or signify a guest contribution or collaboration. One Beatmap can have multiple difficulties.

The Hit Circles and Sliders are ordered by way of numbers to tell the player which order to hit them in. However, the numbers cannot simply go on forever. The Beatmap creator can edit the numbers so as to create combos. (See “Beatmap Creation”) These have an effect on gameplay as well. When the last note on a combo is hit, the player will either get 100 points (if they missed an action in the combo) or 300 points (if they hit all the actions).

There are certain “Mods” in place in the game to add increased difficulty for better players or make it easier for new ones. They will also modify the final score the player gets, so as to make the leaderboards fair. Mods with score modifiers can be stacked to get a higher score in exchange for a harder song.

The player's life meter is displayed in the top-left of the screen. It will decrease with every missed action (Can be adjusted in Beatmap creation), and increase with every hit action. If the life bar drains completely, the player will fail.

When the song is complete, the player will receive a grade based on their performance.

If a silver S or SS is shown, it denotes that the player completed the song with the “Hidden” or “Flashlight” mod enabled.

Three other modes are available for play in osu! with their own leaderboards and rankings. Taiko, Catch the Beat, and osu!mania.

"Catch the Beat” is a very simple game mode. The player has to move a character from left to right across the screen in order to catch fruit that is falling in time with the beat.

This game mode is similar to franchises like "Beatmania IIDX" or "Dance Dance Revolution," where the player will have to hit keys corresponding to notes traveling down from the top of the screen. Depending on the beatmap and/or player settings there can be 4-8 keys.

osu! has features built into the game for Beatmap creation and submission, as well as in-game chat and multiplayer (versus or Co-Op) modes.

Beatmaps can be created in osu! using MP3 or OGG files. Once the creator has chosen a song, they can add Hit Circles, Sliders, and Spinners. Slider direction can be modified, combo beginnings and ends can be specified, and more. Once completed, the beatmap will need to be submitted. Since osu! relies on community-made Beatmaps for content, there's a website for submitting and browsing them. When a Beatmap is submitted, it goes through the approval process. This process involves moderators playing and rating the Beatmap, and marking it for approval. Only approved Beatmaps can have leaderboards.

In addition to interacting with each other through the in-game chat, players can engage in multiplayer games as well.

In a versus game, a group of players play a Beatmap, and their scores are compared at the end.

In a Co-Op game, players will alternate between each other, playing every other combo. 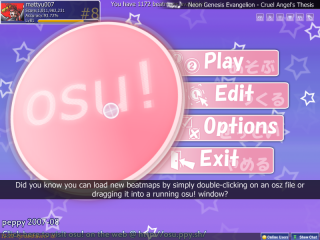