StarTropics was released by Nintendo in 1990 and introduced gamers to Mike and his quest to save his uncle.

StarTropics was released in the United States for the Nintendo Entertainment System on December 1, 1990. Star Tropics is an anomaly in that the game was developed exclusively for American and European audiences, and has never seen the light of day in Japan. The game was developed by a team of Japanese game designers living in the U.S., the same team responsible for the Punch-Out!! games. The game has been re-released on the Wii virtual console for both North American and PAL regions as of January 2008.

StarTropics tells the story of Mike Jones , a teenager and all-star pitcher from the mainland U.S., arrives on C-Island to visit his archaeologist uncle, Dr. Steve Jones. Upon his arrival, he finds that his uncle has gone missing, and absolutely no one knows where he went. Mike, determined to discover the whereabouts of his beloved uncle, arms himself with baseball parephernelia, and sets off on his quest. He'll battle a giant octopus, cure diseases, fight zombies and moai heads, on his long and perilous journey.

StarTropics is a mix of console RPG and action-adventure elements. Outside of dungeon areas, the player moves around the overworld map and villages, talks to others, collects items and solves the occasional puzzle. Inside dungeons, the viewpoint switches to a zoomed in top-down perspective. The player must guide Mike from room to room, jumping over traps and gaps, trigger switches, and fight off enemies using an assortment of weapons ranging from the basic yo-yo to an alien laser gun and a magic snow man doll capable of freezing enemies.

Health is monitored in an identical fashion to the Legend of Zelda series, with a display of hearts that empties as Mike takes damage. The life meter can be extended by finding heart containers scattered throughout the game.

When StarTropics was released on the NES, the game was packaged with a letter from Mike's uncle. Although it looked like a fairly standard if useless game trinket, information hidden within the paper was actually required to complete the game. There comes a point in the game where Mike is stranded on an island, and in order to get the Sub-C back on course, he must enter a three digit password. The player is given a hint to apply water to the letter in order to reveal the code required to continue. In an era before the internet and online FAQs, if the player either did not understand that the game referred to the letter that came with the game or had lost the letter entirely, then they would not be able to progress any further into the game without guessing the correct passcode: 747.

When StarTropics was released on the Virtual Console, Nintendo got around this puzzle by including the letter from Dr. Jones in the game's Home Menu operations guide. By clicking an icon in the letter that depicted a sheet of paper being dipped in water, the password is revealed. 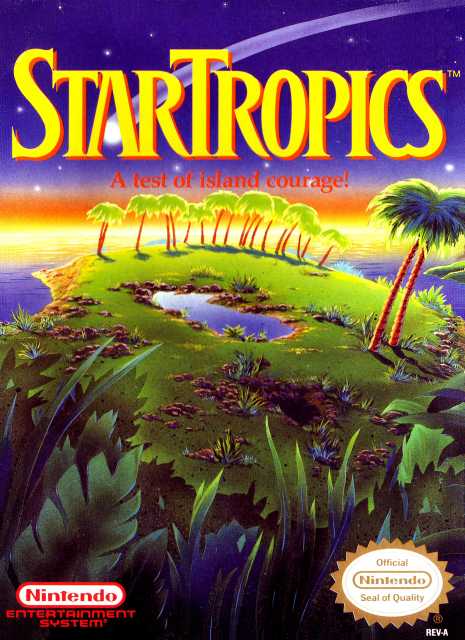