A DS RPG developed by Matrix Software and Red Entertainment. Lead Eddie on a quest around the world to find his missing father in a steampunk version of 19th century earth, complete with powerful airships that can carry you across the globe in mere hours.
Nintendo DS

Nostalgia is an RPG for the Nintendo DS that takes place in a rendition of late nineteenth century Earth where airship travel is common. As the son of a legendary traveler, the protagonist Eddie has longed to go on an adventure. However, his father became involved in a violent struggle against a mysterious organization and went missing. After making the decision to search for him, Eddie boards his father's airship with his friends and set off on a globe-spanning journey to such locales as London, New York, and Atlantis.

The game was co-developed by Matrix Software, the same developer behind the DS versions of Final Fantasy III and Final Fantasy IV and Red Entertainment, which developed Thousand Arms, as well as the mainline entries in the Tengai Makyou series. Torajiro Tsujino, the character designer for Tengai Makyou, also designed the characters of Nostalgia. It was originally published by Tecmo and released in Japan on November 5, 2008 and was released in North America on October 27, 2009 via Ignition Entertainment.

Five characters are playable in Nostalgia, one of which is only available for a very brief time. Each recruit is mandatory in order to progress the story. There are specific side quests, however, which are unique to each of the permanent members and will often reward that character with abilities or equipment that only they can use.

Five characters will join the hero party for a temporary time as guests. They cannot be controlled in battle, nor is it possible to change their equipment. Like the playable characters and enemies, they have a turn order which dictates when they will execute their attack or healing action.

There are several characters in the game who give Edward and company important information, usually regarding where they should go next.

The primary antagonists of the game. They seek the seven segments of an ancient fractured tablet which have been scattered all across the earth. 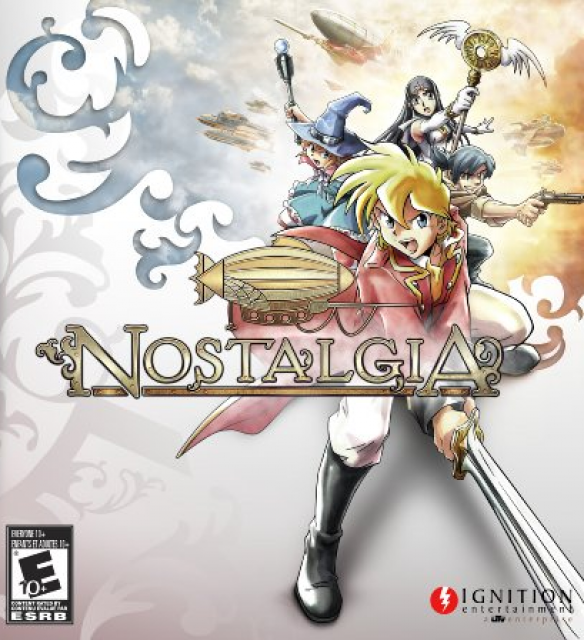