Taking place during the events of Halo 2, Halo 3: ODST puts players in the shoes of a silent Orbital Drop Shock Trooper (known as the Rookie) as he traverses through the Covenant-occupied metropolis of New Mombasa to find the whereabouts of his missing squadmates.
Xbox 360 Xbox 360 Games Store

Halo 3: ODST is a sci-fi first-person shooter developed by Bungie and published by Microsoft for the Xbox 360 on September 22, 2009.

A standalone expansion of the 2007 game Halo 3, ODST puts players in the role of elite United Nations Space Command soldiers, known as Orbital Drop Shock Troopers (or "ODST"), during the Covenant invasion of Earth. An enhanced version of the game was later included in the Halo: The Master Chief Collection compilation for the Xbox One and PC.

In the main campaign, players control a nameless silent ODST known as "the Rookie". Sent to suppress the invasion of the African metropolis New Mombasa (by dropping onto the Prophet of Regret's assault carrier from HEVs in low orbit), the Rookie and the rest of his squad get scattered around the city as the assault carrier jumps into slipspace and knocks the electronic systems for the HEVs offline. After being knocked unconscious for six hours after the drop, the Rookie must traverse the Covenant-occupied city at night, alone, to find the whereabouts of his squadmates (with help from the Superintendent, an A.I. construct that maintains the city's infrastructure). While a large chunk of the game is exploring the "hub world" as the Rookie, most of the missions are played in flashbacks as other squadmates.

Along with various gameplay enhancements and changes (such as new silenced weapons, the return of a dedicated health bar, and removal of dual-wielding), the game includes a new co-operative wave-based survival mode (known as Firefight) and a bonus "Halo 3: Mythic" disc containing a Campaign-less version of Halo 3 (including all DLC, as well as timed-exclusive multiplayer maps). Owners of the game also received access to the Halo: Reach multiplayer beta.

The game's online servers were later discontinued on January 13, 2022, removing the matchmaking and file sharing systems.

The Rookie, a Lance Corporal of the UNSC Marine Corps with a mysterious identity, is a member of a six-man ODST squad from the UNSC Say My Name heavy cruiser. Throughout the game, the Rookie discovers objects that hint to what has happened to his fellow squadmates. Whenever one of these objects is encountered, a playable flashback mission occurs, with the player taking the role of a certain squadmate.

UNSC Navy Captain Veronica Dare is an intelligence officer of the Office of Naval Intelligence (Section One) who took command of the squad from Buck (whom she has had a romantic relation with in the past) in order to perform a confidential mission in New Mombasa.

Despite wearing ODST armor (a specialized Recon variant, based on the MJOLNIR Recon Armor), she is not an ODST.

She is only playable in Firefight mode. Her signature weapon is the M6C Magnum.

She is voiced by Tricia Helfer, of Battlestar Galactica fame.

UNSC Marine Corps Gunnery Sergeant Edward Buck is a long-time veteran of the Human-Covenant War (serving in both the Liberation of Harvest and the Fall of Reach). An extremely skilled UNSC Marine, he was appointed the leader of the five-man squad before Dare took over.

He is playable in the "Tayari Plaza" and "Kikowani Station" flashback missions. His signature weapon is the MA5C Assault Rifle.

He is voiced by Nathan Fillion, of Firefly fame.

He served in the same unit as Romeo during the Battle of Ariel prior to the drop.

He is playable in the "Uplift Reserve" and "ONI Alpha Site" flashback missions. His signature weapon is the M6 Spartan Laser.

He is voiced by Adam Baldwin, also of Firefly fame.

UNSC Marine Corps Lance Corporal Kojo "Romeo" Agu is the squad's marksman. Despite being one of the best battle-tested snipers of the UNSC, he is aggressive, disrespectful, and difficult to work with off-the-field. It is established outside of the game that Romeo would have been dishonourably discharged years ago because of his personality if the UNSC didn't need every soldier they could get their hands on to fight the Covenant.

He served in the same unit as Dutch during the Battle of Ariel prior to the drop.

He is playable in the "NMPD HQ" flashback mission. His signature weapon is the SRS99D Sniper Rifle.

He is voiced by high-profile voice actor Nolan North.

UNSC Marine Corps Private First Class Michael "Mickey" Crespo is the squad's explosive ordnance expert. Growing up as a foster child, he is the former crew chief of a Pelican dropship prior to joining the UNSC Defense Force. Despite his enthusiasm, he has never seen a planet get glassed by the Covenant (unlike the rest of his squad). Mickey is actually of a lower rank than the Rookie; the latter received that nickname because he joined the squad more recently, not because he is the lowest ranking member of it.

He is playable in the "Kizingo Boulevard" flashback mission. His signature weapon is the M41 Rocket Launcher.

He is voiced by Alan Tudyk, also of Firefly fame.

Halo 3: ODST's single-player campaign plays somewhat differently than the other games in the Halo franchise. The game sets the players in a partially open city with the goal of finding and investigating the last known locations of your four ODST squad-mates while fighting off the Covenant forces in the area. Once you reach one of the last-known waypoints of a teammate, you discover an object related to the events they've been through--such as a ruined sniper rifle hanging from a street light--and enter a flashback to earlier that day, where you control the squad member for an entire level. Through these 30-minute or so flashbacks (which play more like traditional, linear, Halo levels) you discover the fate of your teammate and unravel the mystery of the events that occurred in New Mombasa. The New Mombasa " open world" is comparable in function to the hub world from a platformer. Although the city in Halo 3: ODST is fairly large, its design and structure is not to be compared with that of Liberty City from Grand Theft Auto or other traditional sandbox-style open world games, given that there is no purpose to the hub world other than the story missions. The impact the city's look has and the time difference between flashback sequences and the Rookie's seemingly hopeless current situation are big parts of the game. Because the Rookie is shorter than the Master Chief's towering 7' height, all enemies and vehicles seem slightly larger. The heads-up display is different from previous games since the player views the world from inside a standard-issue ODST helmet instead of a suit of Mjolnir armor or a Sangheili war harness.

In addition to the new progression method, players have some new tools at their fingertips:

However, with the switch to a non-Spartan protagonist, some of the player's abilities are lessened:

Firefight is a survival mode that resembles the Horde mode in Gears of War 2.

There are a total of 10 maps in which a maximum of four players can defend against waves of enemies. Each wave gets progressively harder, players killed will respawn at the end of each wave provided at least one player remains alive. The game continues until all players are dead and the game is over.

Firefight mode utilizes the unlockable skulls found in Halo 3, so they do not need to be unlocked in ODST. As you move through the waves of a Firefight match, more skulls will automatically turn on.

Firefight mode does not feature a matchmaking option for online play, meaning players can only play via system link or online via friend lists.

Halo 3: ODST has several avatar awards you can obtain. Technically, none of the awards are from ODST, they are awarded by Halo Waypoint. After earning the appropriate achievement in ODST, Waypoint must be run to earn the achievement.

Installing Halo 3: ODST on your hard drive takes up about 3.5 GB of space. Installing ODST will not adversely affect performance like installing Halo 3 did. However, the multiplayer disc, being the exact same engine as Halo 3, will still suffer from performance issues when installed. 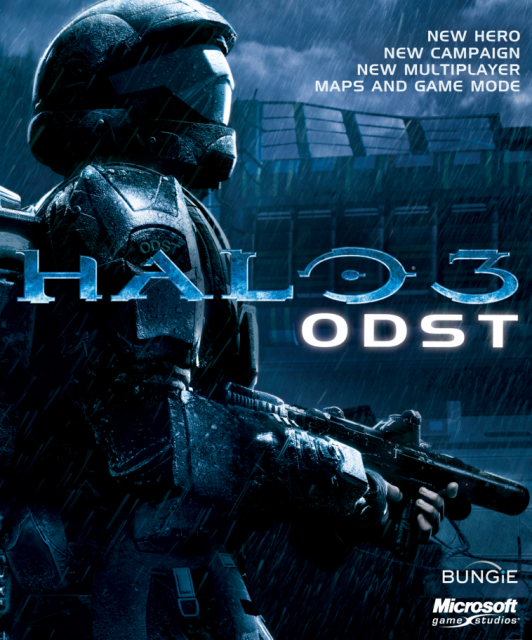