Namco's Super Batter Up is a baseball game and the US version of the first Super Famista.

Super Famista is the first in Namco's Family Stadium (usually abbreviated to Fami Sta, or Famista) series of baseball games to be released on the Super Famicom. It is the first of five Super Famista games for the system and has the unique distinction among those five as being the only game that was released in the US, re-branded as Super Batter Up.

As with the US-only sequels to the first game in the series, which was released as RBI Baseball in the US, the American version changes the series's trademark chibi-fied athletes to give them more realistic proportions. Both versions have the licenses to feature athletes from their respective national associations (Nippon Professional Baseball and the Major League Baseball Players Association), though the American version doesn't have the necessary Major League Baseball license to use the actual team names.

There are single player and two-player modes, as well as a league mode. 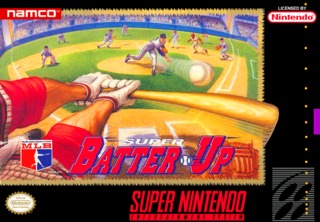