After losing his monster cargo all over a peacefull planet, It's up to Bomberman to find and hunt them down again.

Bomberman Quest is an RPG game developed by Hudson and published by Electro-Brain (US version), and Hudson (European and Japanese versions) for the Game Boy Color.

Bomberman is piloting the Bomber Ship which is transporting the various enemies that Bomberman has defeated. These enemies are on their way to Planet Bomber to be imprisoned.

The Bomber Ship is suddenly attacked by four mysterious lights. The lights then surround the ship and steal the four engines. While the attack is happening the imprisoned monsters are set free.

Without the engines the Bomber Ship crashes to the surface on an unknown planet. All of the enemies who were released from their cells start attacking the residents on the unknown planet.

Bomberman awakes from his crash and realizes that he needs to save the residents of this planet from these enemies and re-capture them.

In Bomberman Quest there are two main play modes. The first mode is the story mode which is the main mode of the game that has players going through the games story in single player. The second mode is a two player battle mode which requires both players to have a Game Boy Color and a copy of the game.

The story mode in Bomberman Quest is played from a top down 2D perspective, similar to that of The Legend of Zelda: Link's Awakening.

Players start the game outside of the crashed Bomber Ship and can then walk around the maps, talk to NPC characters, and attack the enemy monsters.

The fighting in Bomberman Quest takes place in real time on the games maps. Players can equip various equipment that has been obtained in the menu. The equipment can be set to be used as the A button or the B button. The bombs are used very similar to a traditional Bomberman bomb. When placed the bomb will sit for a few seconds before exploding to the left, right, up, and down.

Initially Bomberman can only place two active bombs at a time. 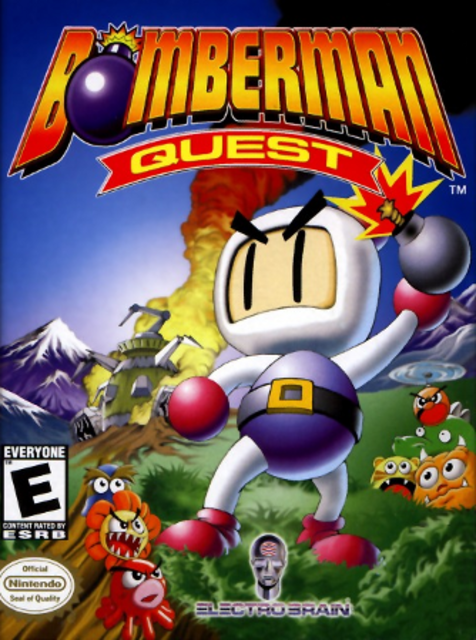