A first-person role-playing game for the DS focusing mainly on exploration and character development, with an old-school RPG feel.
Nintendo DS

The Dark Spire is an RPG for the Nintendo DS that was developed by Success Corp. and published in North America by Atlus on April 14, 2009. It is a grid-based first-person RPG in the vein of Etrian Odyssey; The Dark Spire hearkens back to the games of the 1980s with an optional retro graphic and sound aesthetic that can be toggled on or off.

The Dark Spire is a first-person RPG - Reminiscent of games such as Wizardry - with a high level of difficulty. The player controls a party of up to four custom adventurers and must navigate the labyrinthine halls of the titular Dark Spire; they must overcome obstacles including random encounters, locked doors and trapped chests.

Similar to other first-person DS RPGs such as Etrian Odyssey or Shin Megami Tensei: Strange Journey, a map of the tower slowly fills in as the player explores its corridors. However, the player's position is not marked on the map except for the use of a spell that temporarily marks the player's current position.

The player may exit the tower and travel to town by returning to the tower's entrance on the first floor. In town; the player can restore the party's health at an inn, stock up on supplies, acquire weapons at a shop, and level up the party at the guild house.

The Dark Spire's simplistic story harks to classic fiction novels and old-school RPGs. An evil wizard of the court stole the queen's necklace right off of her neck, and then fled to a distant part of the land where he created an enormous tower filled with foul monsters and traps to protect him. The player controls a group of adventurers that undertake the task of ascending the tower in order to slay the wizard and reclaim the necklace.

In addition to the main narrative, there is a plethora of side-quests as well. The game world is described using flavorful text, but it can be turned off for those that don't prefer it.

The Dark Spire features two different audio/visual modes that affect the look and feel of the game's presentation without altering its gameplay. The player is freely allowed to switch between the two modes at will.

The default "modern" mode features environments, characters, and monsters all colorfully drawn in, and the soundtrack is given a modern orchestration with vocals. The alternative "wire-frame" mode changes the graphics and sound to a retro-style reminiscent of old computer RPGs from the 1980s. The environment is rendered in a stark, black and white wire-frame that sacrifices artistic detail for the quaint, nostalgic look that the older games it references are known for. Portions of the soundtrack are also affected by this mode, and are played not in their default orchestration but as simplified midis.

Before the game is allowed to begin, the player must go through the process of character creation and form a party of four adventurers. The player is allowed to create more than four in total, but any that are not selected for the party will remain behind at the guild house. The player is also prevented from creating a party containing characters of conflicting Lawful and Chaotic alignments.

The first step in character creation is naming the character. Gender of the name is inconsequential, as the party members are never referred to using gendered pronouns.

After the character has been named, a race must be chosen. The race selected determines parameters for the character's alignment and base stats. The available races include:

If the character is either a human or a halfling, then an alignment must be chosen. There are three alignments:

Initial stat assignment is random and in some ways similar to the use of dice rolls in pen and paper games. The maximum and minimum value ranges for specific stats depends on the character's race. Players are allowed to "reroll" a character's stats during this part of the creation process as often as desired. The base stat categories are:

A character's class determines the basic abilities of the character. There are four classes to choose from:

Launch copies of The Dark Spire came packaged with a soundtrack CD packed with more than an hour of music from the game. Though uncredited in the CD's liner notes, the game's composer is Kenichi Arakawa.

The Dark Spire received mixed reviews. As of Janurary 15, 2011, it stands with a score of 69 on Metacritic. Of the twenty-three reviews highlighted by the website, Play Magazine awarded it with the best review and a metascore of 90. The review states that the game is "too niche for most. But if you can squeeze yourself into that niche, prepare for addiction to take root." The worst review, rated with a metascore of 40 from NGamer UK, criticized the game's visuals as being too archaic to enjoy. 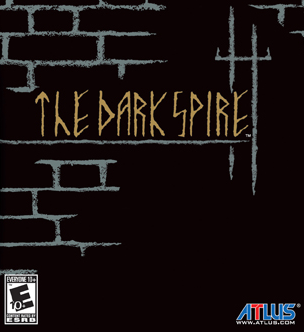