When his beloved Bandage Girl is kidnapped by the evil Dr. Fetus, the diminutive yet plucky Meat Boy springs into action!

It follows the titular Meat Boy, a "boy without skin," as he attempts to rescue his girlfriend Bandage Girl from the menacing Dr. Fetus while avoiding a variety of deadly obstacles (most commonly sawblades, missiles, and laser beams). The game is known for its tricky "trial and error" gameplay, where players must use precise controls and an infinite amount of lives (with quick restarts) to clear each short level (filled with platforming puzzles of increasing difficulty) as fast as they can.

Similar to some other indie games (such as The Behemoth's Alien Hominid), the concept for Super Meat Boy began as a free online game made in Adobe Flash for the entertainment site Newgrounds. This game, originally called Meat Boy, was released on October 5, 2008. Super Meat Boy references other games and videos from the Newgrounds community, as well as the indie game scene at large at the time (including N, Aquaria, VVVVVV, I Wanna Be The Guy, and Braid). The game's development process was featured in the 2012 documentary Indie Game: The Movie.

Both XBLA and Steam versions include different platform-exclusive characters and features (such as avatar awards and free level packs for the XBLA version and a level editor and more achievements for the Steam version). Due to licensing issues between musician Danny Baranowsky and Team Meat, the BlitWorks ports feature a brand new soundtrack featuring Ridiculon (of The Binding of Isaac: Rebirth fame), David Scatliffe (of Hotline Miami fame), and Laura Shigihara (of Plants vs. Zombies fame). This soundtrack was later introduced on the Steam version on April 13, 2017.

Along with the its spiritual sequel The End is Nigh, the game will receive a full-fledged sequel in 2018 (titled Super Meat Boy Forever) featuring randomly-generated levels.

The objective of Super Meat Boy is to guide Meat Boy (or one of the other playable characters) past deadly obstacles to reach Bandage Girl, who will be promptly kidnapped by Dr. Fetus. Navigation of these obstacles requires extremely precise timing to pass. Failure means instant death and a quick restart from the beginning of the level. The player is given an infinite amount of lives and near-instantaneous respawns, but Meat Boy leaves a trail of blood to mark where he has been and what obstacles previously killed him. When a regular level is completed, a replay showcases every attempt within the level simultaneously.

Over the course of the game, new mechanics are introduced and obstacles become more complex. These include rising tides of lava, portals, magnetic fields, fans, lava rocks, and eventually enemies that hunt down the player character. All obstacles will result in instantaneous death upon contact. The "bosses" are equally indestructible; instead of actually fighting them, these levels require players to navigate difficult puzzles under time restraints until a cutscene is triggered.

Players can also collect bandages scattered around certain levels to unlock characters and certain levels. In order for the player to keep Bandages, they must collect them and successfully reach the exit in one attempt. Some bandages require specific characters and all are difficult to collect, especially in the purple Warp Zones, where players must not only collect the Bandage, but clear each of the three levels with a limited number of lives.

Super Meat Boy features five main worlds, each with forty regular levels. The initial twenty levels are referred to as the "Light World". If the player is able to clear a Light World level under its par time, they will be able to access the "Dark World" counterpart (which shares the same basic geometry, but has a different appearance and increased difficulty). Each Light World version of the five main worlds also include a boss level, which must be completed in order to progress to the next world. Boss levels are unlocked after the player beats 17 out of the 20 Light World levels.

Along the way, players can also find purple Warp Zones within certain levels. These portals vanish after a set period of time during the level attempt, though reaching these portals makes the Warp Zone available in the level selection screen. Entering a Warp Zone will transport Meat Boy (regardless of which character reaches the warp zone) to a retro-themed zone which is notably difficult. Each zone comes with three levels that must be completed consecutively with a special version of Meat Boy. Bandages are found within these warp zones, but the player will only have three attempts per level to collect them and clear the Warp Zone. If Meat Boy dies during the final attempt at any level, all bandages found during the Warp Zone attempt will be reset, and the player will be kicked back to the level selection screen. Replays and par times are unavailable for Warp Zones.

Red Warp Zones function similarly to purple Warp Zones but are played instead with a secret character. There are no bandages in red warp zones but there are also unlimited lives. There are only five red warp zones, one in each of the main Light Worlds. Each main world also has a special "glitch zone", reached by getting to Bandage Girl while she is in a randomly occurring "glitch state". Glitch zones feature no bandages and only one level, which is typically longer and more difficult than any of the world's Warp Zones.

The Forest introduces buzzsaws, static sawblade launchers, and impassable tiles that crumble away soon after the player touches it.

The Salt Factory introduces harmful salt, homing missile launchers, moving platforms, tiles that only crumble away after coming in to contact with a missile, and high-speed conveyor belts.

Rapture introduces orbs that repulse the player, abominations (both running and flying) that head towards the player, and homing sawblade launchers.

Unlocked after completing Chapter 6, Cotton Alley is a special 40-level world that can only be played by Bandage Girl (who is, ironically, rescuing Meat Boy from Dr. Fetus). Despite the pink and cheery atmosphere, the levels are extremely difficult. There are no bandages in this world; the obstacles are mainly limited to giant buzzsaws.

After collecting 20 Bandages, a bonus chapter (known as "TEH INTERNETS" in the Xbox 360 version and "Super Meat World" in the PC, Mac, and Linux versions) is unlocked that provides free downloadable chapters. This feature is not included in the PlayStation Network version.

Each downloadable chapter can contain up to 20 levels (with both par times and separate leaderboards) and an option to restrict the character chosen. While the "Super Meat World" version is populated by user-generated maps, the "TEH INTERNETS" version is developer-curated only.

Due to a problem with the map-uploading system, users cannot add any chapters to the PC, Mac, and Linux versions.

Each version of the game comes with around twelve unique playable characters to choose from, half of them being platform-exclusive characters. They can either be unlocked by collecting bandages, reaching certain Warp Zones, or entering secret cheat codes in the character selection screen.

Each character has his/her own unique abilities that differentiate them from Meat Boy, such as the ability to double jump, perform unique jumps, or act differently around map tiles.

Super Meat Boy's old school soundtrack was engineered by Danny Baranowsky of dB Soundworks. Composed of 34 tracks, it is available at meatboymusic.com.

A two-disc soundtrack titled "NICE TO MEAT YOU" has also been released, with an additional 39 songs for a total 73 tracks. It contains new remixes, menu and cutscene music, and some unused songs. The CDs feature the sawblade motif seen on the retail install disc.

Identical to the first 28 tracks of the OST 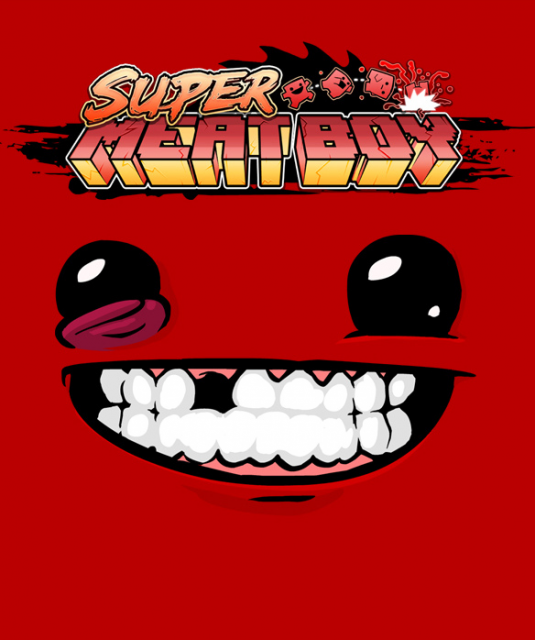