Half-Minute Hero (known as Yuusha 30 in Japan) is an original take on the standard RPG system for the PSP. The story mode consists of 30-second quests with hundreds of stages. The game also is a hybrid of several other genres, including shoot em' up, puzzle, and real-time strategy elements.

Alongside the main story mode is a Ad-Hoc multiplayer mode which lets the player race up to 3 other players in Hero mode. included in the game there is a gallery called the "Goddess Room" that lets the player view artwork of characters and enemies. The game is available on UMD and on the PlayStation Network.

"Goddess Era 100...An epic battle has begun. With the evil lord's arrival, the world will be destroyed. What awaits the new young hero on the dangerous road ahead!? Save the World in 30 Sec!"

Hero 30 is the standard RPG-type mode in the game. This mode is unlocked from the start.

There are many missions in Hero 30, with many branching paths. The player controls the blond, nameless Hero. Each mission starts off with the boss of the level giving their speech, then Hero will start with 30 seconds to stop the Evil Lord. To defeat the boss Hero must level up and buy equipment and other items to help him on his quest. He can sprint to skip enemy encounters, but his HP will decrease as he sprints. If he dies, he will restart at the beginning with 10 HP.

Time only stops during cutscenes and in towns, houses, or friendly castles (unless the player is on the hard difficulty). But if the player runs low on time, Hero can visit a Time Goddess statue. By paying some of the gold Hero receives from battles to reset time back to 30 seconds. It costs 100 the first time, but gradually goes up the more times the player resets time in a level. 200 for the second time, 300 for the 3rd, etc. If Hero does not have enough money, he can trade all of his equipment for one final time reset. Hero will give his equipment to the Time Goddess after the mission is over.

In towns, Hero can spend gold to buy healing items. There are two main kinds. Regular food heals him instantly. While herbs can be saved and used at the press of a button. There are also some added effects, such as increasing Max HP.

Like in any RPG, Hero is able to buy equipment such as swords or helmets to increase his stats. They can also find new equipment in the environment. Stats are as follows:

There are three different parts of the day that can be experienced.

Some missions have certain events that happen at the certain time of the day.

For example, a cave that has a rare item might have tough monsters at all times except for the evening.

The quest map is open, and there are various paths to take. Most are determined by accomplishing (or not accomplishing) a certain goal. If Hero stops bandits from burning down a forest in one stage, that opens up the north path. If he lets the forest burn he will be forced to go south. Most paths lead to different missions, but if one fails to fulfill a certain goal, the game ends. The player is often encouraged to try multiple branches for new equipment before moving onto more difficult stages.

After beating a quest, the player may go back and try to beat it again in a faster time. The Time Goddess will not allow the Hero to use new weapons or equipment - which is to say, items that are not available before the stage begins. There are many different ranks based on how fast the Hero completes each mission such as "Sucky Hero" and "Wonderful Hero."

"Goddess Era 200...A beautiful evil lord tries to lift the curse on his lover and destroy all evil! Continue summoning monsters for 30 seconds! The beautiful battle against humans in a Real Time Strategy Game!"

This is a real-time strategy mode. This mode is unlocked from the start.

The playable character is the Beautiful Evil Lord (who makes an appearance in Hero 30) and must summon a variety of monsters in order to defeat hordes of heroes and bosses. The Beautiful Evil Lord is largely inspired by Psaro the Manslayer from Dragon Quest IV, though takes elements from various other androgynous anti-heroes and sympathetic villains.

The game utilizes a RPS style battle system, where the Beautiful Evil Lord is able to summon three kinds of monsters. Each strong to another type.

The Beautiful Evil Lord starts with a summoning circle that grows in size as he levels up. As he summons creatures, the circle shrinks.

The bigger the circle, the stronger the monster he summons. The circle regrows as he spends time recharging, but the circle will shrink if he gets hurt.

There are 4 Spirits the Beautiful Evil Lord can save in side missions to aid him. Once he finds them in a mission, he can use their special attack.

Once he saves them, they will randomly appear in other missions, and he can save up their power to use when he wants.

The Time Goddess appears in this mode, but works in a different way.

She will be hiding out in a golden barrel. If the Beautiful Evil Lord touches the barrel he will reset time at the cost of all his coins.

"Goddess Era 300...A kind-hearted princess goes outside the castle in search of a medicinal herb to cure her father's illness!

Guarded by her loyal soldiers she shoots arrows in this High Speed Shooting Game! She's got a 30 second curfew!?"

Princess 30 is a 2D shooter mode. This mode is unlocked from the start.

The playable character in this mode is the Princess on top on a group of soldiers and she must complete a variety of tasks while fending off enemies with arrows to complete the 30 second quests.

The Princess starts out with 30 soldiers carrying her. As she gets hit, she loses soldiers. The more soldiers she has, the higher her rate of fire. Her speed also increases.

She can never lose all of her soldiers, and will always keep two. Soldiers will respawn after some time.

The Time Goddess appears in a different way. She will lay out a red carpet throughout certain parts of the stage. When she steps on the red carpet, her remaining time will go up (to a max of 30 seconds) while her gold will go down as she is riding over the red carpet.

Goddess Era 500...With the Time Goddess gone, a salvaged knight and a sage set off on a journey. Using all sorts of actions, he will defend the sage for 30 seconds no matter how many times he dies. Death Defying Action Game!

Knight 30 is a RTS-type mode. This mode is unlocked after completing the first three modes (Hero, Evil Lord, and Princess)

The playable character is the Knight and Sage, and the Knight must defend the Sage from an onslaught of monsters for 30 seconds so the spell can be cast. The sage can cast spells to assist the knight, but he is venerable and must be defended.

The difference in this mode is that the player wants time to go down to zero. When time runs out, the spell is cast and the mission is complete.

The Knight can pull the Sage around by his hand, or he can carry him. Time does not go down while carrying the sage.

There are also some enchanted areas which allows time to decrease at a higher rate.

Since the Knight cannot lose by time running out, the only way he can die is if the Sage dies. The Sage can be hit 4 times before he dies and the game ends. The Knight has a certain amount of Stamina (for sprinting) and HP. If the Knight runs out of HP, he will also die, but the Sage will be able to summon his ghost. As the ghost, the Knight must find his way back to his body.

There are many traps that can be used to slow/stop the enemies' advance. The Knight has 8 hours the night before a mission.

Making each weapon takes 3 hours (but leveling up reduces the time necessary).

In addition to the traps, there are various melee weapons the Knight can use such as shovels or broken swords.

Once small enemies are stunned, he can pick them up and throw them. He can also jump on big enemies and spin them.

"Goddess Era 500...Ultimate Evil Lord has awaken! The ancient heroes gather to save what is left of humanity.

Armageddon...has begun. Only 300 seconds until the world collapses. "

Hero 300 is a RPG-type mode. It is unlocked after completing Knight 30. The playable character is Hero again.

This is the final battle of the story mode, as the title implies, Hero has 300 seconds (five minutes) to save the world.

Hero starts out with nothing, so he will start out with cheap items (wooden sword, sandals) and must eventually work his way to better items.

The Time Goddess isn't in this mode, but there are various checkpoints Hero must reach. Usually every 60 seconds. Seeing as time cannot be reset, it's imperative for Hero to make these checkpoints if he has any hope of winning.

If Hero fails, the player must restart the ENTIRE mission. This creates the need to think of a long term strategy, something not needed until now.

"There will be a bonus for the hero that finishes the battle. A sadistically hard retro game! Save the world in 3 seconds! Super High Speed RPG"

Hero 3 is a RPG-type mode. It is unlocked after completing Hero 300.

As the title implies, the player has THREE seconds.

Like Hero 300, the player needs a well planned strategy, but they also need pinpoint execution.

The player is able to reset time, but with only 3 seconds. There is no room for error. There is only one level in Hero 3 mode. Completing it unlocks the game's soundtrack.

A two CD soundtrack has been released, it is made up of tracks by various composers.

Like the game's stages, most of the tracks are fairly short, and cross over various genres with a retro feel. 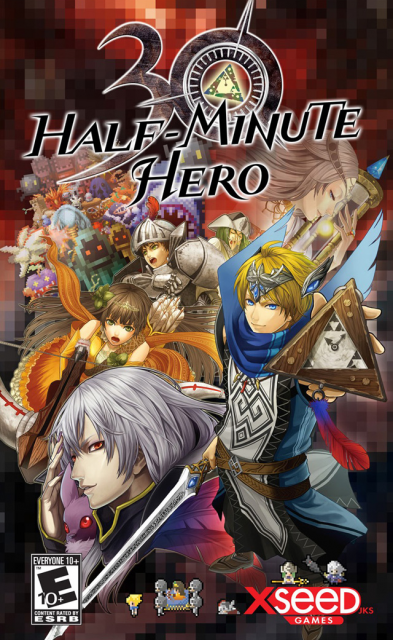