Prince of Persia is the original Persian adventure by Jordan Mechner and the first game in a multi-million dollar franchise.

Prince of Persia was originally released in 1989 for the Apple II by Jordan Mechner. Mechner used film of his younger brother David running, jumping, and performing many of the Prince's actions. Mechner then rotoscoped the film to create the animations that give the Prince his fluid movement.

Part of the game's appeal was its then unique focus on environmental puzzle-solving, as well as its one-on-one sword duels. Mechner has stated that the game was inspired by the first ten minutes of Raiders of the Lost Ark, for the character's acrobatics in a dangerous environment.

The music was written by Jordan Mechner's father, Francis Mechner.

Prince of Persia is a platformer with heavy emphasis on careful jumping and environmental puzzle solving. The player controls the Prince as he attempts to rescue his princess before she weds Jaffar, the evil Grand Vizier. Jaffar has trapped the Princess, and given her an hour to decide whether she wishes to marry him or die. This hour unfolds in real time, and the only way to lose the game is to fail to reach the Princess within sixty minutes.

The player is given only an hour to navigate the game's thirteen levels and rescue her. Scattered throughout each level are hidden switches, secret pitfalls and a variety of other hazards standing in the Prince's way of rescuing his beloved. There are also hidden potions that have a variety of effects on the Prince.

The player will have to explore and pay attention to their environment in order to solve the puzzles and make it to the end. The Prince will also have to fight his way past guards to reach the Princess. Combat exists as a series of sword fights, which were unusual for its time when projectile weapons were the norm.

The Sultan of Persia, one day, leaves to wage war in a foreign land. His Grand Vizier, Jaffar, steps in to take his throne while he is away. Shortly thereafter, a street urchin decides to climb the Royal Tower to see the Princess, whom people have claimed to be as beautiful as a new moon. When the young orphan finally sees the Princess, they fall in love. The couple intend to marry.

The Vizier discovers this and decides that he wants to marry the Princess. He throws the street urchin into the lowest dungeon and locks the Princess in the highest tower. He then gives the Princess one hour, counted on a magical hourglass, in which she has to decide to marry the Vizier or die.

The street urchin's main goal is to defeat Jaffar and reach the Princess.

Aside from being ported to several different platforms, Prince of Persia has received two proper sequels and a 3D remake. Ubisoft re-imagined the series with its Sands of Time trilogy, and the French publisher again rebooted the series with a new game, titled simply Prince of Persia. A motion picture based on Prince of Persia: The Sands of Time is also being developed, Mike Newell directing, and is being produced by Jerry Bruckheimer. The movie was released in 2010 starring Jake Gyllenhaal, Gemma Arterton, and Ben Kingsley and was received with average reviews.

The game was ported many times, and version such as the SNES one which improved on the original. In the SNES game, the graphics were updated, and the game was given 20 levels, and an extra hour to complete the game.

The original Prince of Persia has sold over 2 million copies.

When the Game Gear version was released Electronic Gaming Monthly issued the scores of 8,8,7,5 adding, "...very impressed with this version of the game. Not only were all the characters and pitfalls very easy to see on the small screen, but even the very fluid animation found on the other versions of the game was duplicated almost perfectly". 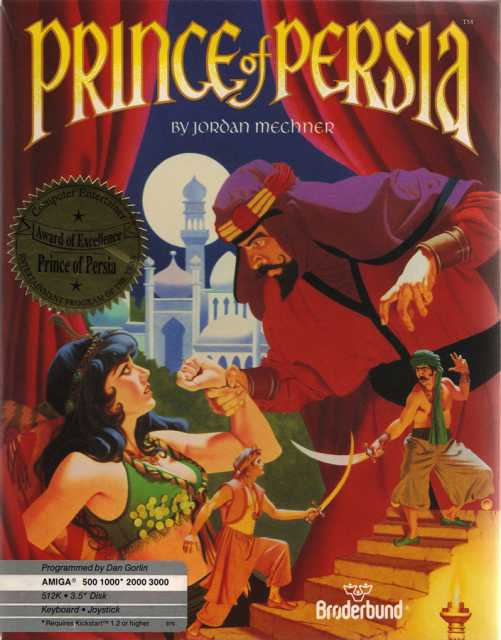