A bloody tale of revenge, Shank is a 2D brawler which has players slicing, shooting, grenading and chainsawing their way through enemies.

At it's core, Shank is a traditional 2D side-scrolling brawler. Players take on the role of the titular Shank, a former gang member who is on a bloody path of revenge after his boss orders the rest of the gang to kill Shank's wife . The story & tone borrows heavily from Kill Bill and other modern grindhouse cinema.

The story of Shank centers around Shank and tells his story of vengeance. The game is split up into multiple levels (20 "chapters") and the story is told through cut-scenes and during gameplay where the screen splits to show you an in game cutscene (similar to what you'd see in shows like 24). It should be noted that the game does not have any subtitles.

The game is set in and starts off with Shank walking into a bar. Once inside he asks the bartender where he can find a wrestler named "The Butcher". He takes down a poster of a fight that's going to happen, "The Butcher" will be there. Right when he's about to leave, the bartender turns on Shank, telling him that he should have remained dead. Men in the bar attack Shank including one with a shank, which our hero takes and brutally murders the other thugs. It's also during this fight that Shank gets his chainsaw and his dual pistols.

While Shank makes his way to the arena where the fight is to be held, it's revealed through a series of flashbacks that he was left for dead by the local mob. The Butcher is part of that mob. What Shank is most pissed off about is that said mob took his girlfriend, Eva. Through the flashbacks, it's shown that it's the Butcher who took Eva, only leaving Shank alive so he can hear her scream. Back in the present, Shank makes it to the match and fights the Butcher. After an epic fight, Shank slices his head off but realizes that he killed the wrong guy (he knows this by the fact that the now dead fighter doesn't have the same tattoo as The Butcher on his arm). He finds out that The Butcher is in the other town and goes there.

After a rather bumpy and violent train ride, Shank makes it to The Butcher's hide out, a factory where meat is stored. The Butcher reveals that he did indeed kill Eva and that he enjoyed every second of it. Flashbacks also show that it's the Butcher who beat up Shank so badly and that Shank's bandana is red because of the blood that poured out of his skull during the beatdown. Shank fights Butcher, choking him with the chains that hold raw pieces of meat. Shank ties the evil wrestler up with his own chains and sends him to the grinder.

Sweet revenge finally fulfilled, Shank makes his way towards Club Stardust, a strip club. It is revealed that the owner of the club (a woman named Cassandra) was also involved in Eva's killing. Shank meets Cassandra at which point a flashback shows that just when Cassandra was about to kill Eva with her katana, Shank showed up and fought Cassandra, giving her a big, red scar across the right part of her face. In present day, Shank kills Cassandra and escapes the club, fighting off waves and waves of ninja strippers.

Our hero meets up with an old friend of his. It's explained that Shank used to be part of a mob ruled by mob boss Cesar. Shank was Cesar's protege, his favorite. He'd asked Shank to kill Eva (why he had to do this is never really explained) but instead ordered his top men (The Butcher, Cassandra and a priest named Father Angelo) to get the job done. Shank, who used to consider the mob like his family, now wants them all dead. He follows his so called friend, who knows where the evil priest is, but stumbles into a trap. After fighting off an army of minions, he catches up with his "friend", chops his left arm off and tells him to go tell Angelo that he's coming. Shank follows the trail of blood left by the amputated mobster and ends up in a church.

Shank fights through God's holy house in hopes to sending Angelo to hell. Once again through a flashback, it's shown that it's Angelo that lit Shank's house on fire, thwarting any plans Shank had in saving Eva. As Shank plows through the church, Angelo gets hold of an RPG and makes the holy word rain down upon Shank in the form of missiles. Shank battles Angelo, separating him from his beloved bazooka. But right when Shank is about to hand out the finishing blow, Angelo fires a rocket that makes the church bell fall on Shank, knocking him out. Our hero wakes up tied to an electric chair, face to face with Cesar who tells him that he's his biggest disappointment. The mob boss leaves and Angelo zaps Shank who then unties himself, ties the priest to the death chair and fries him.

Shank runs after Cesar, killing anyone in his path. He finally meets up with him and prepares for the final showdown. As they fight, more about Shank's past is revealed. After having gotten the order, Shank goes home to kill Eva. But upon arriving, Eva reveals that she's carrying his child. Just when Shank gets a change of heart, the mob arrives and the rest is history. Shank explained that Cesar had always taught him the importance of family which is why he couldn't go through with it. Cesar tells him that if he had known this, things could have gone differently but he doesn't try to apologize. As the fight nears its end, Shank gets stabbed and shot multiple times in the chest. Despite all this, he gets up and brutally murders Cesar. After this epic climax, Shank walks towards the sunset, his revenge fulfilled.

The story in Co-op is a prequel to the single player story and tells the story of when Shank and Falcone used to be hit men for Cesar's mob.

The game starts with Falcone and Shank hanging out talking about life. Falcone makes fun of Shank for going out with Eva, who's a kindergarten teacher. Falcone states that Cesar isn't to pleased with Shank's relationship, a sign of things to come. Shank and Falcone head to Cassandra's strip club and after watching a sexy performance by Cassandra, bikers kidnap her and attempt to rape her in a back alley. Our two heroes arrive in time and kill one of the bikers, leaving the other one for Cassandra to torture.

Falcone and Shank head to a wrestling match, a match that Cesar had rigged. According to Cesar, The Butcher was supposed to lose the fight but the wrestler decides to beat his opponent. Of course, Shank and Falcone must put the Butcher back in his place and beat up the butcher, knocking out one of his teeth.

Cesar calls the two hit men and ask them to go save Father Angelo who's been locked up by members of his congregation for being corrupt and evil. After killing a number of guards, they set the evil priest free, who decides to kidnap the young minister responsible for the mutiny and brings him to Cesar. After giving him a life lesson, Angelo takes out his magnum and shoots the priest in the face, much to Shank's disapproval.

After the holy drama, Shank decides to take Eva out on a date. But before he even starts the car, Falcone calls him for an important hit: the deputy mayor is in town and that he must be eliminated. By taking him out, the mob will be able to control and have a hand on the SWAT (which explains why the mob is using them as goons in the single player). While Shank is killing dudes, Eva goes looking for him because he's parked the car in a no parking zone.

After killing the deputy's bodyguard, Shank and Falcone are two fingers away from taking the deputy out when Eva shows up and gets taken hostage. Suddenly Shank is full of doubt, not being able to pull the trigger. Cesar's personal assistant shows up and kills the deputy mayor and is about to kill Eva since she's deemed as a niusance when Shank dives in front of her and kills Cesar's best man. Realizing that they have to flee, Eva and Shank drive off into the sunset while a voice over from Cesar tells his assassins to go and kill them.

Shank has 3 main attacks; his dual shanks, his larger blades (choose between chainsaw, machetes, fist chains, or katana), and his guns (choose between dual pistols, shotgun, or uzi). Each weapon is selectable on the fly, and is mapped to a face button, so attacks can be easily strung together. There is also a grapple (grab) ability, a pounce attack, and grenades that can be picked up. One of Shank's most original attacks is his pounce, he can pounce on most enemies at which point he pins his enemy down and can kill them in a variety of ways. He can stab him multiple times with his shanks, first stabbing him before violently bashing him on the ground. You can chain another weapon into Shank's violent stabbing and bashing. For example, he can impale him with his chainsaw or dual machetes. While holding him down, he can fire his fire arm at surrounding enemies to keep them at bay or shoot the one he's holding down in the face.

Certain attacks will work better on certain enemies, to encourage experimentation. For example, the pounce attack doesn't work on larger enemies, the enemies catching Shank and throwing him to the ground. There are also dogs that maul Shank and enemies equipped with guns or assault rifles. Some larger enemies have riot shields, grenade launchers, flamethrowers and gatling guns. Shank can pick up some of these heavy weapons but they're unequipped when Shank jumps. Some enemies are quick on their feet, dodging most of Shank's attacks while others ram him.

Shank also features a local only co-op mode, in which the second player plays as Shank's former partner in crime, Falcone (who bears an odd resemblance to Danny Trejo). The story in the co-op serves as a prelude to the story of the single player campaign in Shank.

There are 10 alternate outfits for players to unlock by fulfilling certain requirements:

On August 5, 2010, the official Shank blog held a contest. If the Shank Facebook page gained 1,500 followers, the soundtrack to the game would be released free of charge. This milestone was reached in three hours, and the soundtrack was made available for download on August 23. 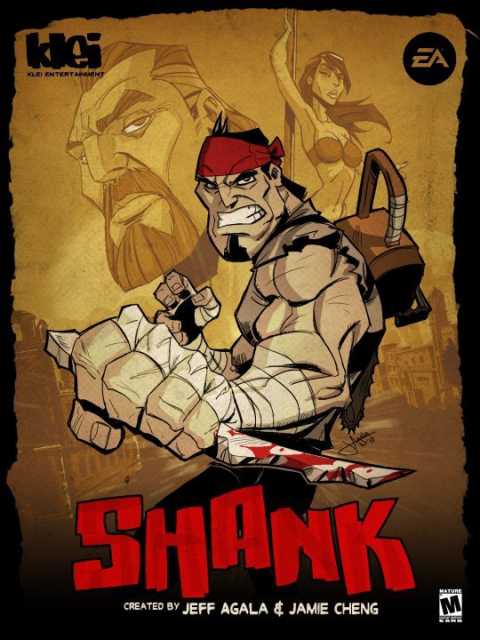