Aggressive Inline takes the gameplay of the Tony Hawk series and applies it to inline skating, adding in an innovative skill progression system for good measure.
Game Boy Advance PlayStation 2

Essentially, Aggressive Inline is extremely similar to Tony Hawk's games, especially Tony Hawks Pro Skater 4. The player takes control of an inline skater in a small, but open, level, and can complete missions for various eccentric characters to not only increase game progression, but to increase the stats of the chosen skater. Some missions stick to generic skating game ideas, such as tasking the player with pulling off a high scoring trick, or racing somewhere in a particular time. However, some missions are decidedly crazier, such as helping a mad scientists achieve his ostensibly evil goals by performing sick-ass tricks. The game also featured a leveling system not unlike that seen in Final Fantasy 2, where the more a skater performs a particular style of trick, the more experience they get in that area, allowing them to perform better or longer (or more insane) tricks in that style.

The game also featured a soundtrack with a slight Third-Wave Ska leaning. 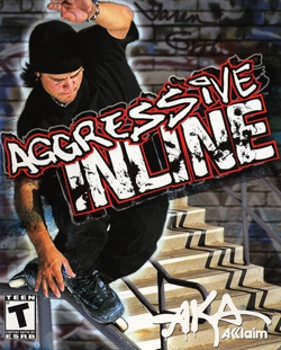