After turning their infamy into worldwide fame, the Third Street Saints now find themselves at war with a powerful criminal organization called The Syndicate. Strap it on.
Xbox 360 PlayStation 3 Xbox 360 Games Store PlayStation Network (PS3)

Saints Row: The Third is an over-the-top open-world action-adventure game developed by Volition and published by THQ for the Xbox 360, PlayStation 3, and PC on November 15, 2011.

The third game in the Saints Row franchise, players take the leader of the 3rd Street Saints (which turned from a Stilwater street gang to an international multi-media empire) into a war against a legendary criminal organization (known as The Syndicate) in their turf: the city of Steelport. Things quickly go incredibly over-the-top, as players eventually must fight a futuristic military organization (known as the S.T.A.G., or Special Tactics Anti-Gang), hack into the online world of one of the Syndicate's leaders (a la Tron), and quell a zombie infestation (with help from the city's mayor, Burt Reynolds).

As in the previous games, Saints Row: The Third features three rival gangs that the Saints must defeat in order to claim the city as their own. These gangs make up a powerful international criminal organization known as The Syndicate:

Led by the influential Phillipe Loren (who is also the leader of the entire Syndicate), these suit-wearing chain-smoking criminals focus on organized means of crime, especially human trafficking and prostitution. Loren's day-to-day affairs are manged by his two personal assistants, Kiki DeWynter and Viola DeWynter (both of which have important roles as the story progresses). Members of the Morning Star tend to drive four-door sedans (such as the Justice and the Infuego); though when they have to hunt down Saints, they make use of sniper assassins in Oppressor helicopters.

The oldest pimp (with an autotuned voice box and well-known connections in the city's criminal underworld) in Steelport, Zimos, was an ally of the DeWynters before becoming imprisoned in their human trafficking ring. After being rescued by the Saints, he will join forces with the Saints and will assist them throughout the campaign. From the Morning Star, they will also rescue Oleg Kirrlov, a superhuman brute (with both incredible strength and superior intellect) who serves as the host to the clone of "Brutes" found throughout the campaign.

Led by the socially challenged cyber-criminal Matt Miller, the Deckers is a gang consisting of young British cyberpunk-inspired punks. They specialize in cybercrime and money laundering. While they are the most technologically sophisticated gang, they make arguably the poorest choice of vehicle usage, with their main staples being the Solar hybrid car, the Kayak SUV, and the Criminal. When hunting down Saints, they make use of rollerblading teenage girls that can travel at supersonic speeds and wield both submachine guns and a powerful shock hammer.

A former intelligence agent for the FBI, Kinzie Kensington, crossed paths with the Deckers before (causing them to frame her for espionage). After being rescued by the Saints after being captured by the Deckers, she will join forces with the Saints and will assist them throughout the campaign.

Led by the hotheaded once-prominent wrestling star Killbane, the Luchadores is a gang consisting of violent, muscular men (wearing lucha libre masks). They specialize in drug dealing and organized gambling. When hunting down Saints, their specialist is a mighty luchador punk with a rapid-fire grenade launcher.

The gang was once led by both Killbane and his former tag-team partner, Angel de la Muerte, before infighting led Killbane to unmask him (considered the greatest form of disrespect in lucha libre). Hungry for revenge, he will join forces with the Saints and will assist them throughout the campaign.

Like Saints Row 2, the game features a powerful and futuristic police force/military organization that makes its appearance late in the game.

Led by Cyrus Temple, the STAG group were formed by the government after being proposed by Senator and former Stilwater mayor Monica Hughes to combat gang violence in Steelport. They are enemies to all gangs in the city, and used advanced weapons and vehicles such as the F-69 VTOL jet and the experimental Specter hover bike. Their weapons consist mainly of futuristic laser-based designs, and some of their vehicle designs share a resemblance to the designs used for Red Faction Guerrilla.

Respect is no longer used to unlock story missions like in the previous two games. Respect now acts as experience which you use to level up your character, unlocking upgrades and abilities for purchase. Activities now play a more prominent role in the game's world; completing them will have more effect on the war against Syndicate as a whole, rather than just supplying the player with more cash and respect.

The fan-favorite from the preceding games makes yet another return. Given an unlimited amount of health, the player must literally throw himself in harms way in order to rack up as much fraudulent insurance money as possible. The Adrenaline meter also returns, allowing a player to throw themselves over extremely large distances and into bigger hazards to maximize their scoring potential.

Trafficking handles identically to the Drug Trafficking missions in the earlier games, with the protagonist riding alongside an AI controlled dealer, who is attempting to sell illegal goods while the police and gang presence escalates in their pursuit. Players will be given weapons and ammunition for these side missions, and depending on the difficulty, the quality of the items received will also increase accordingly.

Fly around in an attack helicopter with heat-seeking missiles and protect your crew members down below. Alternate version has you protecting Kinzie instead of Pierce and you are given more control over the helicopter.

Drive a car with a prostitute who is entertaining a client in the back seat, while avoiding unwanted attention from news crews. Also includes a variation where the player must drive with a live tiger in the vehicle while attempting to not enrage the animal.

Take out pimps and steal their prostitutes. Alternate version has you picking up captured FBI informants from gang members.

Ride around on a flaming ATV and cause as much damage as you can in the allotted time. There's also a variant called "Cyber Blazing" where the player jumps into cyberspace and help Kinzie hack rival gangs' systems by racing through them in a Tron style lightcycle.

Protect a target from afar using weapons such as rocket launchers from a helicopter and a sniper rifle from a roof while they complete their objectives. When playing in co-op, both players will be protecting the AI, rather than one character manning the aircraft, as happened in Saints Row 2's Helicopter Assault side missions.

Using an array of explosive weapons at your disposal, rack up the most amount of dollars in damage to your surroundings as possible. Ammo is unlimited for certain weapons, and there are typically areas with more cars spawning to make causing havoc easier. Gangs and police are also eligible as targets for destruction.

Much like the Mayhem activity, only this time you have a near indestructible tank at your disposal. Tanks in the game are extremely resistant to damage and with the limited time in Tank Mayhem, destroying a tank is nigh-on impossible. Tank Mayhem is one of the easiest side activities, since it normally has certain areas designated with huge numbers of enemies and vehicles, to boost your combo and kills.

Find and kill a list of assassination targets. There are thirty-six targets and each target has different criteria before they will spawn and can be killed. For example, one target requires you to park at a gas station in a muscle car. When they spawn you may kill them in any manner desired, as was the case for Saints Row 2, though not in the original, where you had to kill targets in a specific manner.

Steal and deliver a list of desired cars. These cars can be found in certain areas of the city, though if you have one in your garage you can drive it into the area and then to the chop shop, barring a few exceptions. Some of the cars needed are specific and will spawn in fixed locations, allowing you to repeatedly attempt to find the car if it has been destroyed during a previous attempt.

The game includes three downloadable sets of missions, all of which can be bought in a season pass (alongside a discount and the Nyte Blayde Pack).

As the star contestant, The Protagonist can participate in four unique versions of regular activities: Super Ethical PR Opportunity (an Escort variant where players must drive Professor Genki to public appearances with the Genkimobile), Apocalypse Genki (a Professor Genki's Super Ethical Reality Climax variant taking place in shark-infested jungles), Sexy Kitten Yarngasm (a Tank Mayhem variant where players must maneuver a giant yarn ball), and Sad Panda Skyblazing (a Base Jumping variant with a unique Sad Panda suit that has special skydiving abilities).

Released on February 21, 2012 for $6.99, Gangstas in Space revolves around a Hollywood recording of the fictional sci-fi film.

Continuing the events of the "Save Shaundi" ending of the main game, The Protagonist must complete the final (and questionably violent) scenes of the film, directed by big-shot Hollywood director Andy Zhen's (who is constantly rude to the cast and crew, primarily The Boss's co-star Jenny Jaros).

The Trouble with Clones

The Saints' biggest fan (nerd Jimmy Torbitson) has attempted to clone Johnny Gat, only to create a hulking brute in Gat's image. It's up to The Protagonist (alongside Jimmy and Pierce) to find and calm down the rampaging clone (known as Johnny Tag) using some oddball plans (which eventually involves gaining superpowers).

As always, the character will have an enormous arsenal of weaponry at his fingertips, ranging from pistols and shotguns to satchel charges. Weapon customization is handled similar to how vehicles were handled in past games. Each weapon can be upgraded three times, affording new abilities such as a better zoom level, or more damage. They are permanently saved to a cache in your crib, much like your garage. Melee with most weapons results in a nutshot melee animation.

There are eight radio stations in the game. Through the in-game phone, the player can also create a Mixtape as a ninth station and add any number of songs from any radio station to it. Unlike in previous games, adding music to a Mixtape does not require buying the music from a music store in-game.

On November 1, in advance of the game's release, an external character creation tool named the Saints Row Initiation Station was made available, allowing players to create their characters before playing the game. They are able to upload their character to the community site where they can share it with others, and download characters created by others. Early access to the Initiation Station was made available to those who pre-ordered Red Faction: Armageddon or purchased the Saints Row Double Pack on October 25th.

The collector's edition of Saints Row: The Third cost $99.99 USD and includes the following:

The PC version for Saints Row: The Third, like Red Faction: Armageddon was done in-house by Volition, promising a much better PC experience than Saints Row 2. The PC version adds a video record mode that allows you to record and save gameplay clips. It also features a much higher upper limit on the graphical presentation.

THQ had promised that the PS3 version of the game would have exclusive content at launch (a multiplayer game mode and a unique weapon). For reasons unknown, that could not be made available. So, to compensate, all North American users who purchased a new PS3 copy of the game and redeemed their online pass code before February 13, 2012, received a free digital copy of Saints Row 2. 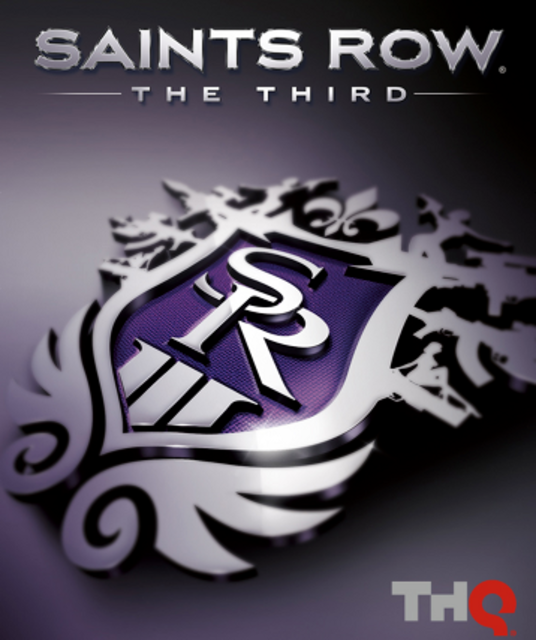