Step into the mind of an ancient Japanese person in the Heian period in ancient Kyoto. Live their fears, fight their demons, and understand their history and legends by actually experiencing them first hand. Released in 1993, it was an early open-world, sandbox adventure game.

The Cosmology of Kyoto's story is an attempt to walk and live in the mindscape of the people of Heiankyo (ancient Kyoto, Japan). It presents the mythology, religions, philosophy, and legends all in a stylized eerie format from the perspective of a denizen of Heiankyo whom the player creates. This denizen starts off naked in a field, finds a mirror to look at for a moment. Across from the player is a dead body from which clothes and a bag of coins are acquired. From there they can make their way from the tall grass to the city gates. The player is told to leave, but a fox leads the player through a broken wall into the city's streets. From here on in is a memory of an age forgotten presented in dozens of unique interactions with the city itself. Player's travel through the city is fraught with muggers, demons, and beggars, as well as festivals, falling stars, and dragons stalking the skies. Whatever is done, one thing is certain, death. At one point or another, death will overtake the player and he or she will experience one of the six Buddhist hells depending on how their lives were conducted. After finding the way out of the hells, players can be reborn again and go through life once more attaining the items lost during the last journey off one's own corpse. The only way to escape the horrors of Kyoto and break free from the cycle of life, death, and the six hells is to achieve enlightenment.

At the start of the game the player can choose a name, gender, and whether or not to be married or single. Then the avatar can be customized. There is no difference between male/female avatar customization. Each avatar's customization in Cosmology of Kyoto is limited to the face and the body. Players can choose the eyebrows, eyes, mouth, the shape of the face and the size of the body (thin, average, and fat). All characters are bald, and there are no hair options.

The avatar's only presence in game can be seen by using the mirror. Avatars change when acquiring clothes, and after death and rebirth. After being reborn, the avatar that was customized will be randomized as if it were a completely new person.

Cosmology's gameplay is simple and somewhat of a cross between a point and click adventure and a visual novel. Like in a visual novel, the player takes on a first person perspective, and like in the game Myst, the mouse cursor changes to indicate the ability to change the perspective in a direction to turn/head in (I.E. North, East, West, Forward, Backward). Items can be picked up, but there is no inventory screen. They are contextually listed when situations arise when they are needed. The game also has a few mouse-oriented mini-games such as sword fighting and shooting arrows. While navigating the city most of the time the player can click the reference button for information about the context at hand from a historical perspective, such as where they are in the city, who they're talking to, and so forth. Dialog in Cosmology is spoken Japanese with English subtitles, and the keyboard is used for situations when the player needs to make a decision in these dialogs. Things can be typed such as "yes", "no", and "hello" to get responses.

Cosmology of Kyoto suffered poor sales in Japan. Apparently this is because of the game's portrayal of Kyoto during the Heian period as being a slum full of beggars, superstition, thieves, demons, and crazed samurai. Compared to the image of Kyoto that exists today, being a place of harmony, art, and beauty, those that saw this game apparently disliked the supposed realism it portrayed.

However, the game was very well received among North American critics. The game was reviewed in 1995 in Dragon magazine #218 by David "Zeb" Cook in the "Eye of the Monitor" column. According to Cook, "Ultimately, Cosmology of Kyoto is best viewed as less a game and more a software toy, one of those things you plug in and fiddle with. Once you forget about winning and indulge your curiosity, the CD-ROM's strength truly shines."

Most notably, this was late film critic Roger Ebert's favourite video game. He reviewed the game in 1994, praising it as "a wonderful game." Later in 2010, he cited it as the video game he enjoyed playing most. In his 2010 column on whether video games can be art, he wrote: "In my actual experience, I have played Cosmology of Kyoto, which I enormously enjoyed, and Myst, for which I lacked the patience." 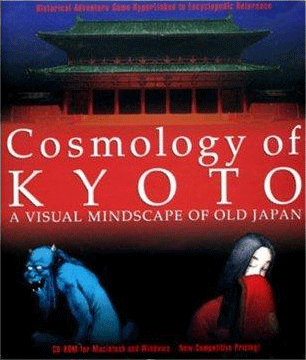