Action platformer for the NES published by DB-Soft. Also known as a maze action game.

Layla is a side-scrolling action game from dB-Soft that followed in the wake of Metroid's success. Much like that game, the player is a female space hunter who is passing through various asteroids while fighting monsters and collecting ammo for her various special weapons.

The player controls the eponymous space heroine Layla, who has to make her way through 8 asteroids to rescue her friend from the malevolent doctor. Along the way she must collect password disks in order to face the doctor's worst creation. Without them, all hope of winning is lost. On each asteroid the player will be required to make their way through a maze to collect the disk and face the boss monster. After each level there is a bonus stage where the goal is to shoot down every enemy formation that appears for bonus points.

The main game is a run-and-gun where the player traverses across each area shooting any enemies that gets in their way. There are non-lethal pit-traps (it simply places the player at the start of the room with some health loss). Each enemy in the game can be defeated by shooting them and once they do explode they will drop a sweet - these sugary items will restore Layla's life. Should the player lose it all, it's game over as there are no extra lives in this game; the player can, however, use a password to continue their game. The bonus levels are pretty much a Gradius clone except it is impossible to die; It's simply a chance to get as many points as possible.

Layla has a vast arsenal of power-ups at her disposal for such an old game; where a game like Castlevania might limit its protagonist to his main whip and an additional sub-weapon, Layla actually allows the player to collect and stock up on various ammo types for when they're needed, which she can recover by destroying the crates she comes across. In perhaps this sense only, the game is a precursor to games like Doom - where keeping a large stock of different weaponry is a necessary tactic for survival. 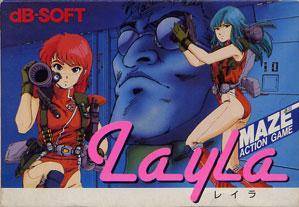