Skiing game for the NES that was eagerly anticipated by some and is generally considered to have not met those expectations.

Its released was delayed for several years in the US, heightening the level of hype. It was the first game developed by Rare, for Nintendo.

The game includes 24 courses, across 3 mountains of varying difficulties; Snowy Hill (Easy), Steep Peak (Medium), and Mt. Nasty (Hard). As you would expect, the aim of the game is to get down to the finish line as fast as possible, whilst avoiding the trees, snowmen, sledding children, and other obstacles. The player must ski between the flags to maintain speed and also may hit moguls for a time bonus.

Slalom is a skiing game, but it wasn't always this way. In the early stages of development the aim was for the team to make a racing engine to run on the NES, but they later discovered that by making the track white and the sides grey, the lack of detail made for a much more seamless experience when scrolling. This is why Rare picked the skiing theme for their engine, keeping the basis simple meant that the only noticeable scrolling elements were skiing related such as flags, snowmen, etc.

Another notable element of Slalom is the attention to detail on the sprite of the playable skier. The sprite detail is very impressive for the time, and the animation is extremely well done, but probably the most notable point to make, is the amount care and attention that went in to shaping the skier's buttocks. 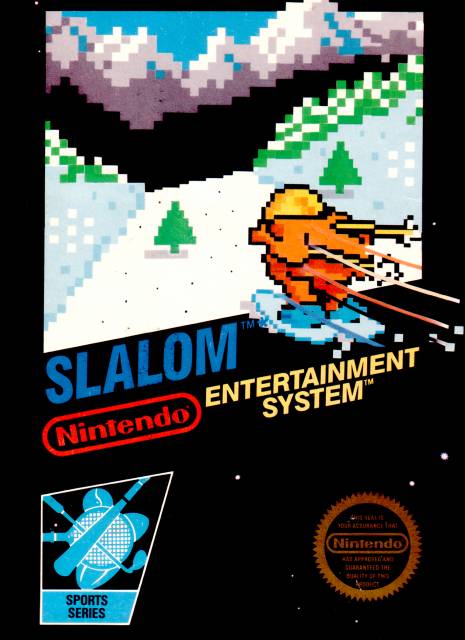