Dive Alert: Becky's Version is one of 2 RPGs (the other game being  Dive Alert: Matt's Version) in the Dive Alert Series for the Neo Geo Pocket Color. Players fight in Synthetic Armored Submarines. The game focuses on ship-to-ship combat, using torpedoes and radar to defeat the enemy ships. Submarines, battle items and characters are logged into a codex after each battle.

Players start the game by naming the title character whatever they choose and then they're asked to choose their Navicom, which they can name whatever they'd like. Next they choose a sub, which can, again, be named to the player's desire.

From the intro:
"In the distant future, the star Sirius B in the constellation of Canis Majoris has inexplicably exploded. The effects of the explosion have stretched through the galaxy, devastating Earth."

The game takes place on the last piece of land on the Earth, referred to as "Terra". Becky and her Navicom Bryce fight against Automen in their sub named "Olive." 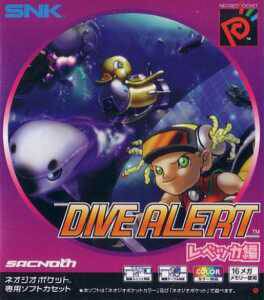