Nothing is as it seems. Nier must travel the world in search of a cure for his daughter who has been infected with the deadly "Black Scrawl" virus. How far will you go to save someone you love?
Xbox 360 PlayStation 3

Originally launched in two versions Nier Gestalt/Nier Replicant for Xbox 360 and Playstation 3 respectively in Japan, Nier is a spin-off of the Drakengard series. The game is an Action RPG that takes place after the original Drakengard's E ending, with Caim and Angelus teleported to modern-day Tokyo, and shot down by fighter jets.

Outside Japan, the game only features one version and protagonist the "father Nier". While the alternative version of the game, sold solely for the Playstation 3 in Japan, the main character is a brother trying to save his sister from the mortal illness. Despite this twist and its implications, the plot for both games remains largely the same, as does the gameplay.

Nier ditches the Warriors-style combat and flight sections to a more conventional third-person 3D Action RPG presentation and controls. The game has a very strict linear progression path for the first half which is supported by optional sidequests. However, by the second half of the game you are given a number of objectives to do before you can progress further in the story.

Melee combat is restricted to at least two face buttons one for normal melee attacks and one for special attacks. A dodge and block ability can be configured to the shoulder buttons if the player wishes. However, these shoulder buttons are also used to trigger the various magic attacks that are gained as the game progresses, these can range from defensive abilities to melee, ranged and AOE attacks.

As enemies begin to use ranged attacks the game can take on an almost Bullet Hell appearance as the player navigates around waves of energy balls to attack foes. Nier is also very referential in its level design including a dungeon that takes place in the style of a Text Based RPG, another dungeon references the Resident Evil mansion including the fixed camera positions.

In Nier, the player fights alongside several companions.

Nier opens in the summer of 2049 in a partially destroyed snow-covered city, in a small grocery store Nier and his sick daughter Yonah come under attack by monsters known as shades. To protect Yonah from the shades Nier sells his soul to a magical book defeats the shades and sees that Yonah’s condition is getting worse. The game then jumps 1,312 years into the future, where Nier, seemingly the same man, has settled in a small sleepy town with few hardships. Nier works with the town’s leader Popola to try to find a cure for Yonah, who is infected with the Black Scrawl. After telling Yonah of the Luna Tear, a flower that will supposedly grant a wish for anyone who finds one, Nier finds that she has disappeared. He heads towards the nearby-lost shrine and fights his way through many shades on his way to the top where he finds Yonah and Grimoire Weiss trapped by two animate statues. With magic gained from Weiss Nier Dispatches of the statues and escapes with Yonah as the Entrance to the shrine collapses.

Back at the town, Popola sends Nier on a mission to the town of Aerie in the hope that defeating powerful Shades will allow Weiss to unlock the Sealed Verses and cure Yonah of the Black Scrawl. Outside of Aerie Nier meets Kainé and helps her defeat a powerful shade then leaves her to recover on her own and returns home to find Yonah in extreme pain. Popola sends Nier to Seafront where Nier catches a Sharman fish and runs a few errands for the local Lighthouse Lady. Nier returns home and feeds Yonah the fish to makes the pain stop. He is then promptly sent to the Junk Heap to upgrade his sword. At the Junk Heap Nier meets two young boys who agree to upgrade his sword if he heads into the heap itself and find their mother. After defeating a giant robot, Nier finds the mother dead with her lover and deduces that she was trying to run away with him, leaving her two sons to fend for themselves. Nier gets his upgrade then decides to check up on Kainé. He and Weiss find her under attack by shades and help her kill them all including the same one that attacked them when they first met, However during the battle they destroy part of Aerie. After the battle, Kainé joins Nier and Weiss and informs them of Façade, a town in the desert that supposedly has a cure for the Black Scrawl.

In Façade after taking a tour from a mute girl Fyra, Nier and gang learn that the king is dead and that the prince is missing. Fyra leads Nier and gang to a barren temple where the prince is trying to find the Royal Mask. After completing the many tests, Nier and Co. save the Prince and return him to Façade. They find out that the cure did not work and return to Yonah.

Later on Popola shows Nier and Weiss a letter from the Mayor of a town in The Forest of Myth and asks them to investigate. In the Forest Nier and Weiss are pulled into a deadly Deathdream and only after defeating the dream from within are they able to escape from it. They save the whole town and report back to Popola. Yonah asks her dad help a pen pal of hers that lives in a big mansion close by so Nier heads there. At the mansion, it is revealed that the boy’s butler was the one that sent the letter to get Nier to defeat the shades that he thinks causes Emil to turn whatever he sees to stone. In the library, the group find another Grimoire and destroy it. This however, does not cure Emil. Nier returns to Yonah having found all the Sealed Verses.

The town is soon attacked by a large force of shades, which forces all the townspeople to flee to the Library. Nier and Co. hold off most of the main force and only retreat when one particularly large shade smashes its way through the town. Nier is able to lock this shade in the basement of the Library but as he is doing this a demonic-looking man that looks similar to Nier known as the Shadowlord appears with Grimoire Noir and kidnaps Yonah. As a last resort, Kainé asks Emil to turn her and the door that is keeping the shade from escaping from the basement to stone. 5 years later Nier receives word from Emil that he might have found a way to control his stone gaze, which will help them free Kainé, so Nier and Weiss head to the mansion. They find a research facility under the mansion where they find the failed weapon Number 6, Emil’s sister. It is revealed that Emil is a bio-weapon called Number7 created to petrify Number 6 after she went out of control. Emil joins with Number 6 and learns to control his power; however, as a by-product Emil is turned into a skeletal shell of himself.

Nier, Weiss and Emil head back to the library to free Kainé and defeat the shade in the basement. Popola then tells Nier that she thinks the lost shrine is the key to get into the Shadowlord’s fortress. They fight their way to the top of the shrine where they meet another statue but this one seems to be possessed by a shade. After they defeat it, Kainé looses control of her demon and attacks Nier who knocks her out. They find part of a stone key that they take back to Popola who thinks that there must be more keys held by powerful shades. The gang heads to the Junk Heap where Gideon informs them that his older brother was killed by a robot deep into the heap. Nier and company head into the heap and find that a shade was controlling the robots so they destroy it and find another piece of the key. The gang then heads to the Forrest of Myth where they investigate a disturbance at the Divine Tree, here they are dragged back into a Deathdream and find that a shade has been responsible for the Deathdreams all along. They defeat the shade in a riddle battle and receive a third piece of the stone key.

Popola tells the gang the reclusive people of Aerie have started to trade with other towns and sends Nier to investigate. This however turns out to be a trap set up by the shades that join into one giant shade. Nier and Kainé find that they cannot defeat the shade and as a last-ditch attempt Emil sets off a huge explosion that destroys all of Aerie. In the rubble, they find another piece of the key. Back at the town, Popola gives Nier a letter from the King of Façade who writes that he and Fyra are to be married and Nier and Kainé are invited to the ceremony. Happiness however does not last as soon after the ceremony Wolves lead by a shade attack and kill Fyra. In retaliation the King leads a group of warriors and Nier to attack the wolves where they kill the shade and receive another piece of the key.

Nier heads to the Lost Shrine and unlocks the door to the Shadowlord’s fortress. Here they find a city and a garden. Weiss answers questions about the fall of man and it is revealed that the Black Scrawl was the reason why Mankind died and to stop this they found a way to split the body from the soul, thus creating Shades. Popola and Devola are revealed as the guardians of the Replicants which make up the population of the world and that they exist to become vessels for the shades. However, the Replicants have flaws, which create the Black Scrawl. The group fight their way through the castle but are cornered by an indestructible shade. It is only when the King of Façade shows up with his elite guard and sacrifice themselves to hold off the shade can Nier escape.

At the pinnacle of the tower, Nier meets Popola and Devola again and fights them. Nier kills Devola and in a fit of rage, Popola destroys everything in her path and produces a black hole. Emil realizes that the only way to stop her is to sacrifice himself, so he does so, stopping the black hole. Nier, Kainé and Weiss confront the Shadowlord and "Noir". During the fight, Yonah wakes up and tells the Shadowlord to stop. It is revealed that the Nier and Yonah from the start of the game are the souls for the main game’s Nier and Yonah. The Shadowlord has placed Yonah’s shade into her body therefore; she has been made human again, however she does not wish for this and decides to free Yonah. Nier is able to destroy the Shadowlord and Noir but Weiss is sacrificed in the act.

There are a total of four endings in Nier.

Square Enix released a Two Disc soundtrack for the game, which was composed by a collaboration of studio MoMACA and Takafami Nishimur. To promote the game before it's Japanese release Square Enix posted teasers of the game's soundtrack on their Japanese Youtube account. A three issue digital comic was released through Xbox Live Marketplace and the Playstation Store. A book called Grimoire Noir was released in Japan only as a way to tell the back-story of the world of Nier, it also acts as a walkthrough for the game. In December, a remix album was released under the title: "Nier Gestalt & Replicant / 15 Nightmares & Arrange tracks" 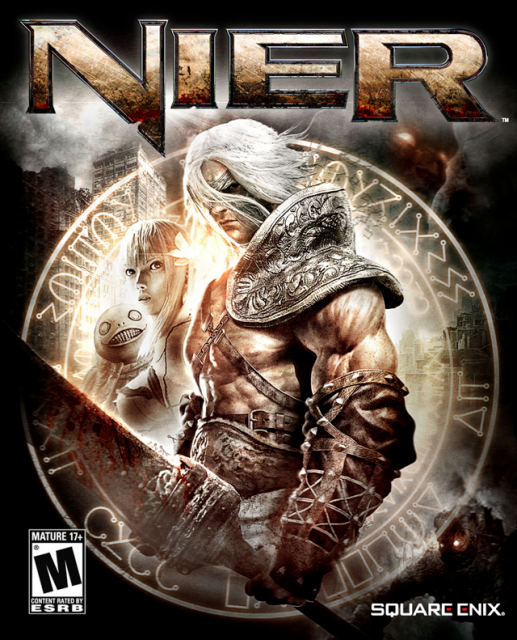