Sol-Feace is a side-scrolling shooter that was a pack-in with the Sega CD. It was also released on the Sharp X68000 and Sega Genesis.

The supercomputer GCS-WT is built to foster stability across humanity's vast and disparate cosmic empire, but goes rogue and establishes itself as emperor. A state-of-the-art starfighter devised by the rebellious Edwin Feace, the Sol-Feace, is humanity's last hope to regain their freedom.

Sol-Feace is strictly a horizonal shoot 'em up with seven stages total, and a power-up system that has players bolting on weapons to the top or bottom of the Sol-Feace craft to improve their firepower. 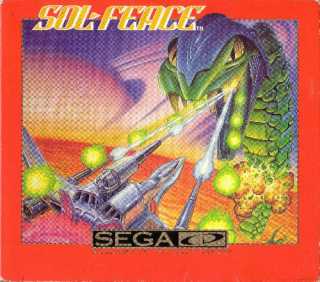