A sequel to the original Tomba!, Tomba! 2 is a platformer adventure game released for the PlayStation in 1999.

Tomba! 2 (Tombi! 2 in PAL regions) is a platforming adventure game released for the PlayStation. In it, you play as a pink-haired youth named Tomba, whose friend, Tabby, has been kidnapped by the evil pigs from the first game as an act of revenge against Tomba. During the course of the game, you travel to various locations, obtain various suits and weapons, and vanquish the swines.

Tomba! 2 is a mission-based game, with various non-player characters giving the protagonist assignments. After completion of each mission, the player is awarded adventurer points [AP], which can be used for many goals, such as opening treasure boxes, starting missions, and obtaining information from non player characters. The player will obtain various items that can range from a banana to get your health back or to a suit that can help you fly, talk to pigs, swim, etc.

The game opens with young Tomba running around and having fun with his friends Zippo and Charles. But then Zippo finds a letter that is addressed to Tomba. The letter states that Tabby, Tomba's childhood friend, has disappeared. Fearing for her safety, Tomba jumps into the ocean, embarking on a journey to go and rescue her. Tomba and Zippo wind up in the fisherman village. There they meet an old man by the name of Kainen who points them in the direction of the Coal-mining town, Tabby's hometown. When they reach the Coal-mining town they meet up with a man by the name of Gran, an old friend of Zippo's. He then points Tomba in the direction of Tabby's house but when they get there they see that Tabby is not there. Gran later says that he saw Tabby on her way to the Kujara Ranch by trolley. He also mentions that the trolley is on its way back and that Tabby would be on it. But when the trolley comes back, its empty leaving Tomba, Zippo, and Gran confused. However, a panicking trolley worker runs through and reveals that Tabby has been kidnapped by the evil pigs. Gran explains that evil pigs are evil beings that have cursed the continent. Tomba is determined to go after the evil pigs and save tabby. Before Tomba goes on his quest, Gran gives Tomba an evil pig bag for the flame pig. The bag, according to Gran, could capture an evil pig and put and end to the curse on the continent.

Tomba would go on and collect the rest of the evil pig bags, one for each cursed town. He cured the coal mining town of its intense fire around the town. He also cured the Kujara Ranch of perpetual snow fall, the Donglin Forest from the haunting of the ghost pig, lifts the curse on the circus town which has turned all of its citizens into pigs, and he cures the Water Temple from perpetual rainfall. Once all the evil pigs have been captured, the leader of the evil pigs reveals himself to Tomba. He tells Tomba to find his lair if he wishes to stop him. Tomba and Zippo not only find his lair, but they also find Kainen their waiting for them. He gives Tomba an evil pig bag to use on the final evil pig to capture him. He also warns Tomba that the last evil pig will try to freeze time in an attempt to stop Tomba. However, Kainen tells him he knows a spell that will allow Tomba to resist the stoppage of time. Sure enough, the evil pig does freeze time but with the help of Kainen's spell, Tomba enters the evil pig's lair and face him. Tomba fights the final battle and is able to capture the last evil pig. However, the last evil pig warns Tomba that he would be back and that next time, he might not be so lucky.

Tomba and Zippo find Tabby in the evil pig's lair. With the area around them collapsing, Tomba, Tabby, and Zippo are able to escape on top of Tomba's flying dog, Baron. They all go back to Tabby's house where she has prepared a feast in celebration of Tomba's victory. After the feast, Kainen appears and gives Tomba a monkey suit for completing every quest in the game. Tomba then is given a new boat in order to go back to his home. However, Tomba crashes the boat on the way home causing everyone to laugh.

Tomba! 2 features 2.5D gameplay in which Tomba moves on predetermined linear paths until he reaches an intersection point where a flashing arrow appears over his head. At that point, Tomba can move in either direction the arrow points. Town areas in the game enable the player to explore them in a top-down view, allowing Tomba to move around freely.

Tomba! 2 is mainly an adventure game with some platforming bits thrown in. The game that is the most analogous to Tomba! 2 is the Legend of Zelda. The game gives you a main story quest to go out and capture five evil pigs. These evil pigs all have different elemental affinities including fire, earth, water, ice, and ghost. These pigs are captured through the use of pig bags which not only capture the evil pigs, it also reveals the evil pigs' hiding spot. The game is actually so similar to the Legend of Zelda that the game has a final quest where it makes you backtrack through all the different towns to unlock the final boss. The game also has 137 side quests which makes this one of the longer games out their. Each quest usually involves solving a problem for somebody whether its collecting a bunch of crabs for somebody or helping out with an ancient ritual.

The game doesn't have a whole lot of combat but it does utilize combat some parts. The game is chock full of weapons such as a mace on a chain, a boomerang, a hammer, etc. The weapons don't actually kill enemies but it does stun them so you can eliminate them. To actually kill enemies, you must jump on top of them where Tomba will grab the enemy. Then you must hit the jump button twice where Tomba will throw the enemy and kill the enemy once and for all.

As the game progresses, Tomba can obtain special suits and weapons that give him new abilities and access to area previously unobtainable.

Tomba acquires many weapons during the course of the game, including:

He also acquires suits throughout the game that bolster his abilities, including:

There are also 5 evil pig robes that follow the evil elemental pigs' abilities. They are:

Tomba! 2 received generally positive reviews from critics.The game holds an 82 percent rating on gamerankings. However, even though the game and its prequel were critically well-received, the games sales were poor. As a result of the poor sales, developer Whoopee Camp had to shut down which meant that franchise would die off. 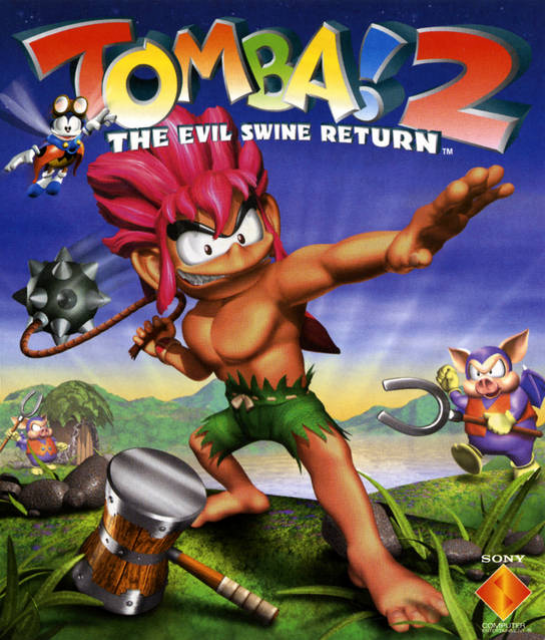