Badass Rumble stars Takashi Sakamoto, a particularly badass high school senior (the badassest at his high school), on an unbearably boring school trip to the historical and cultural mecca of Kyouto (not to be confused with Kyoto). As luck would have it, 47 other badass banchos are in Kyouto as well, sent by their serendipitously like-minded high schools, with each bancho being the toughest representative from their region.

With a week to spend in Kyouto, players control Takashi with the primary goal of proving that he is the toughest hombre in town, and by extension Japan, by means of "serving knuckle sandwiches at the all-you-can-eat buffet."

Gameplay revolves around being able to "fight practically anyone" in the city, with the aim being to beat the other banchos to earn their loyalty, territory, and special moves over the course of a week. However, the game is open-ended and allows the player to wander the city and do as they please.

Though the player is a bancho, they are not necessarily a bully or a criminal; seeking out consensual brawls is the primary goal for any respectable bancho. Attacking bystanders, destroying property, using weapons, and being a wimp are frowned upon.

The player can customize Takashi's hairstyle, clothing, facial hair, and fighting style over the course of the game. The game also features two-player ad-hoc co-op.

Kenka Bancho 3 was localised for North America by Atlus USA. The name Kenka Bancho: Badass Rumble was chosen by the Atlus Faithful (a.k.a. members of the Atlus mailing list) who voted for the name in an online survey. The number was removed from the title as it is the first in the series to be officially released outside of Japan. 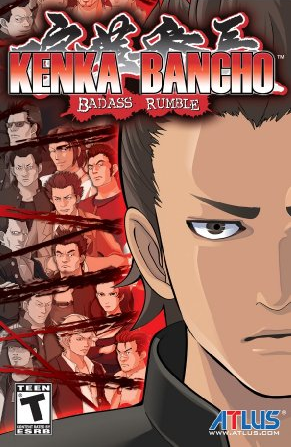