A video game adaptation of the 1982 RPG Books by Steve Jackson and Ian Livingstone, developed by Big Blue Bubble and produced by Aspyr for the Nintendo DS.
Nintendo DS

Deep within a Dwarven Keep, an evil Warlock has taken control. Though few have ever seen him face to face, legend of his immense riches spreads far and wide throughout the land. Many intrepid adventurers have assaulted the Dwarven keep in search of the Warlock's gold, but none have returned alive. Will you finally be the one to defeat the Warlock of Firetop Mountain and claim his vast fortune?

Fighting Fantasy is a role-playing game played from the first-person perspective, in similar vein to classic Western RPG games like Elder Scrolls II: Daggerfall (though much smaller in scope). Your one overarching task is to infiltrate an abandoned Dwarven Keep and fight your way through the Warlock's minions. A short questionnaire at the beginning of the game determines your starting skills and your class.

Defeated enemies provide experience points, and if a player acquires enough experience, their skill level goes up. When you level up, you are presented with the ability to improve various existing statistics and abilities or learn new ones. Weapons and armor (either bought from traders or found on enemy corpses) often require a certain proficiency in a specific skills or statistics in order to be used.

Friendly NPCs can offer up quests for the hero to partake in, and completing a quest will often provide the player with additional money. When a quest is taken, a marker is placed on your map and an icon appears on the player's compass, guiding him to the objective.

Though exploration is always possible, there is a very clear progression the player takes through the keep, and accidentally opening the wrong door out of curiosity can sometimes lead to an enemy that is much more powerful than the player. Though there are save points scattered throughout the keep, the game quick saves every time the player moves through a door.

Many more familiar Western RPG conventions are also featured, such as lock-picking, dialog trees, and more.

Control is done similarly to a first-person shooter on a controller with two analog sticks: the Nintendo DS directional pad is used for strafing and the face buttons used for looking around. Additionally, if the player chooses, looking can be done by holding the stylus to the center of the bottom screen and dragging.

Attacking is done with the left and right shoulder buttons, for both weak and strong attacks, respectively. Players can move items, spells and weapons on to seven touch screen slots for quick selection.

"Fighting Fantasy: The Warlock of Firetop Mountain" is based on a book series written by Ian Livingstone (of Deathtrap Dungeon fame) and Steve Jackson in the 1980s. The Fighting Fantasy series took cues from the popular "Choose Your Own Adventure" style books, where the reader would be presented with a choice to decide what happens next in the story. Fighting Fantasy defined itself not only by offering up choices to direct the story, but even combat scenarios decided by dice rolls, similar to the Dungeons & Dragons tabletop role-playing game. Nearly 60 books were published under the Fighting Fantasy brand from 1980 to 1995. In 2002, Wizard Books bought the rights to Fighting Fantasy, and, in addition to re-printing classic stories has begun producing new books, such as Fighting Fantasy: Stormslayer in September 2009. 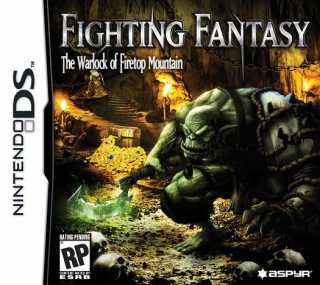