Duck Hunt was one of the original NES launch titles, featuring a lightgun, ducks and a laughing blood-hound.

Duck Hunt was first developed in conjunction with the Laser Clay Shooting System. This system was a light gun simulation made by Nintendo. The game itself was created by Nintendo Research and Development Team 1 in 1973, a time before Nintendo had branched into game development. The game was directed by Takehiro Izushi and produced by Gunpei Yokoi. The same team were responsible for the creation and development of the light gun used by the game. The game's original soundtrack was composed by Koji Kondo and Hirokazu Tanaka.

There are three game modes: 1 Duck, 2 Ducks, and Clay Pigeons. In 1 Duck and 2 Ducks, the game is set in a wetlands where the player's hunting dog chases ducks out of a marsh. Each round tasks the player with shooting a series of ducks out of the air with the Zapper. Depending on the mode selected, one or two ducks will appear at a time. To progress to the next round, the player must shoot down a set number of ducks, with the number of ducks required to progress increasing as the player proceeds further into the game. Each time a duck (or pair of ducks) flies on screen, the player is given three shots. If the player misses with all three shots, the ducks will fly away.

In the Clay Pigeon mode, the game is set on a shooting range in which clay pigeon targets are launched into the air and fly into the distance. Similar to the duck-hunting modes, the player must shoot down a set number of pigeons to advance to subsequent rounds.

References in Other Games

Duck Hunt’s characters have since made appearances in other games. The dog can be seen in Barker Bill’s Trick Shooting, and in Super Smash Brothers Brawl a trophy featuring ducks from the game can be unlocked.

In Super Smash Bros. for Wii U and Nintendo 3DS, both the dog and a duck are a playable fighter collectively called Duck Hunt. The duo's special moves and Final Smash reference various light gun games.

Technical Details About the Light Gun

The Zapper Light Gun, like all light gun peripherals of a similar design, is essentially a light sensor in a barrel. When the player presses the trigger, the game screen turns black for a brief moment, save for a small white square that appears on screen in position of a valid target. The player scores a hit if the light sensor in the barrel detects a white square on the screen.

The nature of the technology involved makes it easy to essentially cheat at Duck Hunt. For example, by simply pointing the gun at a lamp, the game always registers hits. Also, by putting a magnifying lens in front of the barrel, the player can make the Zapper see a larger part of the screen, which lessens the need for correct aiming.

When there is more than one target on the screen, instead of showing a black screen with a white spot, the game will show the light gun a black screen and then a plain white screen. Because the entire screen is turned white in this instance, the nature of the gun/screen interface changes.

For the purposes of this explanation, this screen cycles from all black to all white in the following order. (Note that the actual time is much faster than the milliseconds used to illustrate.)

If the target is at pixel B and the player is aiming correctly, the screen turns black when the trigger is pulled, and then the screen starts to become white. After two milliseconds, pixel B will become white and the light gun will send a positive signal to the NES. The NES knows that the target was at pixel B and that after the player pulled the trigger, it took two milliseconds for the Zapper to send the signal to the console. By doing some calculations, the game can then recognize that the target has been shot. Duck Hunt uses this technique to allow for more than one target on screen at a time.

Duck Hunt and other light gun titles of the era were designed to function based on the mechanics of a cathode ray tube (CRT) television. Specifically, the light gun is designed to work with the way a CRT display refreshes the displayed image from frame to frame. Different latency in later model high definition (HD) displays accounts for the problems with light gun functionality on these devices.

Duck Hunt will become the first light gun shooter released in the Virtual Console line of classic game rereleases. Its release on the Wii U requires the player use a Wii Remote to play. Because the Wii Remote pointer functions via an IR sensor, it avoids the limitations of a light gun peripheral and thus allows for the game to be playable on an HD flat-screen television display. 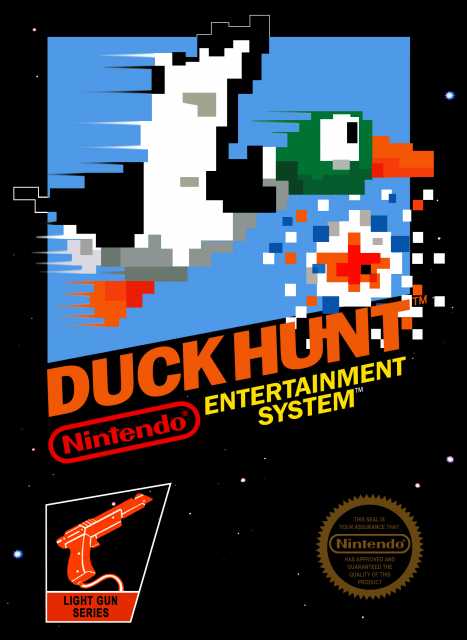