Sled Storm is one of the first snowmobile racing games on the PS1 and it spawned a sequel on the PS2.

Sled Storm is one of the first snowmobile racing title on the Playstation.  Six racers could be chosen, and each had upgradable snowmobiles, where you could increase stats, such as handling and acceleration.  Additionally, a trick system was implemented and allowed players to score points.

The whole point to Sled Storm is to race on snowmobiles around many different and diverse winter tracks. After winning race upon race you will upgrade your snowmobile to be the best there is.

The gameplay in Sled Storm is like any racing game out there, but with snowmobiles. Each sled or character has different attributes, and can be used to your advantage or disadvantage. Like any racing game, you can accelerate, reverse, and also do tricks while in mid air to gain points. There is a total of 6 racers to choose from, whom are all unique and have different stats, then you pit it out on single player mode on several different tracks from mountain cliffs to icy forest paths. Each level has many different secrets or hidden paths that can be very difficult to land, but giving you a great advantage if landed. Throughout the single player, you will race against 5 other players for up to 6 racers, and you have to achieve first place in each race to advance, and also gain attribute points to then use to upgrade your sled. Every level in Sled Storm is unique in its own way, and all vary a whole lot.

There is also a multiplayer aspect for up to 4 players using the multitap. This is just like your basic multiplayer where you and three other player race against each other on all of the maps. You can also use your single player character and their attributes in multiplayer too, so each player can have their own racer with their own stats.

One of the main aspects of this game is its trick system. The game allows you to pull off really cool tricks, and a lot of them too. Each player will be rewarded points for landing a trick, and multiple tricks can be executed while in air as well. At the end of a race there will be first place for winning as well, it keeps track who accumulated the most points too.

The gameplay delivers a great simulation of what snowmobiling really is. Most of the things you can do in this game can also be done in real life, so its not stretching to far from the real thing. Sled Storm also has wheather effects like fog, and night time effects, as well as snow storm effects too. This causes the races to become fairly more difficult, and make the game more of a variety. 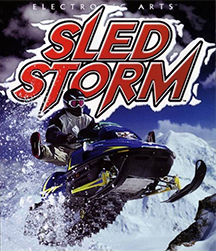