Surreal RPG published by Shouei System for the Super Famicom in 1994. Koji Aihara, the satirical manga artist, was behind the art design and story. He also created the equally odd Maka Maka.

Idea no Hi ("Day of the Idea") is a surreal turn-based JRPG from Office Kukan and Shouei System. The manga artist Koji Aihara penned the story and worked on the character design. The protagonist is a player-named boy who escapes from a laboratory after awakening to his psychokinetic powers. His quest takes him across a dystopian world, picking up allies along the way.

The game has a few novel ideas, like allowing the protagonist to crossdress (which changes their profile picture) or wear underwear on his head, the latter of which results in people treating him like a pervert, which has a few beneficial side-effects. The protagonist has a "limit break" style attack when low on health, and the game has a day/night cycle. 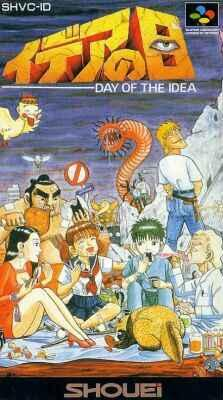