EA's Canada-based Black Box team is responsible for the core releases in the Skate series, and they returned to develop the 2010 model, Skate 3. The key features for this, the fourth game in the series, include an online cooperative component that allows multiple players to play through the

career mode at the same time. The game also features a brand new city, new skating mechanics, and three levels of difficulty--each of which alters the physics and mechanics of the gameplay to provide an easy, traditional, or 'hardcore' experience.

Skate 3 takes place outside of San Vanelona in a new city titled Port Carverton. Port Carverton is "on the other side of the mountain" from San Vanelona. Unlike the previous game, Port Carverton is not built as one large environment, but instead as a series of three large areas that you can travel between using the game's menu. These areas are: Industrial, University and Downtown.

The story of Skate 3 has you filling the shoes of a returning legendary skater who is looking to set up a new skate team. As you play, you'll recruit new (custom-created) skaters for your team, and as you complete goals, you'll see board sales rise. As you hit sales milestones, more goals and areas will open up to you. In the beginning, you'll have the option of going through a tutorial, which is anchored by a character named Coach Frank. Coach Frank is voiced by and based on famous pro skater-turned-actor Jason Lee. The coach will also appear on the game's loading screens with occasional tips and other information. Real-life skate photographers Atiba Jefferson and Giovanni Reda, who were featured in previous titles, also return in limited roles. Reda will no longer be reprising his role as the players personal photographer. This role will now be filled by a NPC skater from the previous games called Shingo. Reda instead appoints himself to a managerial role in the player's new brand and checks in on the player to give him new information and progress the story.

Skate 3 puts an increased focus on online by offering a new co-op career mode. Like the other online modes, it can be played by up to six players. Some goals present the skate team with a list of tasks that must be completed, regardless of which skater completes them. Others, like photo goals, require each skater to complete the task before the goal is cleared. Photo goals create new opportunity for hijinks, as skaters can stand or skate into each others' photos. The photos you select are occasionally placed around Port Carverton on billboards and other surfaces.

Skate 3 attempts to create a social connection with the players on your friends list by popping up messages in your "skate.feed" as you play. The messages will inform you when a friend completes a goal, among other things. You can also import your friends' created skaters for use in your career's skate team. As with previous games in the series, certain UI elements, including the feed's ticker, are covered in branding for a popular cell phone provider.

The "flick it" control system from Skate 2 returns in Skate 3 with two new enhancements. By using the "grab the world" button (RB on 360) in conjunction with a kickflip, the skater can catch the board mid-flip with the board paint-side-up for a darkslide. You must flip trick out of a darkslide in order to properly orient the board for landing. You can also perform underflips. After performing a standard flip trick, you can immediately pull the stick in the opposite direction to initiate an underflip. You can also hold either of the triggers to grab your board, and then press either A or X to perform bonelesses, no complies, and also foot plants. The final addition to the skating control system is the ability to drop in from various ramp surfaces. While on foot and approaching a lip, one can press and holding the mount the board button. You will assume the drop in position. Upon releasing the mount the board button (Y or triangle), your skater will drop in fluidly down the ramp.

New goals include camera goals that ask you to place the camera down before attempting to perform specific tricks. The Hall of Meat makes a return (but doesn't activate automatically outside of challenges, as it is an optional feature in this game), as will a fully filmed full-motion video intro movie featuring the game's licensed skaters.

In a Skate series first, players now have access to a full park creation system. This is in contrast to Skate 2, which only allowed the player to use the in game character model to physically move small ramps and rails, Skate 3 adds to this with an item-dropping tool that can be used anywhere (but usually not while engaged in a challenge). Players are be able to drop objects into the game world using a God-hand interface, unlock objects by progressing through the game, as well as unlock various types of environments in which to build your teams own private facility.

The graphics editor has also been overhauled. An updated version of the web-based graphics editor that accompanied Skate 2 is available online, allowing players to create custom graphics on the Skate website and then import those into Skate 3 for use with their characters' merchandise.

Another new aspect of the game this year is the introduction of difficulty modes, with players being able to choose between 'Easy', 'Normal' and 'Hardcore' mode respectively. 'Normal' mode is pretty self explanatory, with similar game play to be found in Skate 2. 'Easy' mode dumbs down the physics and adds increased suction into grinds for those not wanting much of a challenge, while 'Hardcore' mode is the complete opposite, drastically increasing the weight of the skater and lowering the height of ollies, as well as almost completely turning off CPU assists in lining up grinds and pumping transitions on vert ramps (which is critical for maintaining speed). This feature turns the game into an almost sim-like recreation of skateboarding, something which real-life skaters and long time fans of the series have been requesting Black Box to include since the first game was released in 2008.

Skate 3, like its predecessor's, includes a robust set of features aimed at sharing, rating, and playing content created by you, your friends, and the rest of the world. Players can view and rate photos, movies, created graphics, and created skate parks, with the highest rated of each being featured on the Skate.Feed that all players see when first booting up the game.

A new feature added in Skate 3 is the ability to create Skate teams that can work together to complete certain storyline challenges, or compete against other skate teams in online competitions.

Much like previous iterations of the franchise Skate 3 will come will a fully licensed soundtrack. Below is both the song and the artist featured. The game will also include an "Interactive Mode" which will change dramatically depending on the skaters competency. This mode includes such composers as: Del the Funky Homosapien, John King (of the Dust Brothers) and Mark Mothersbaugh (of Devo). 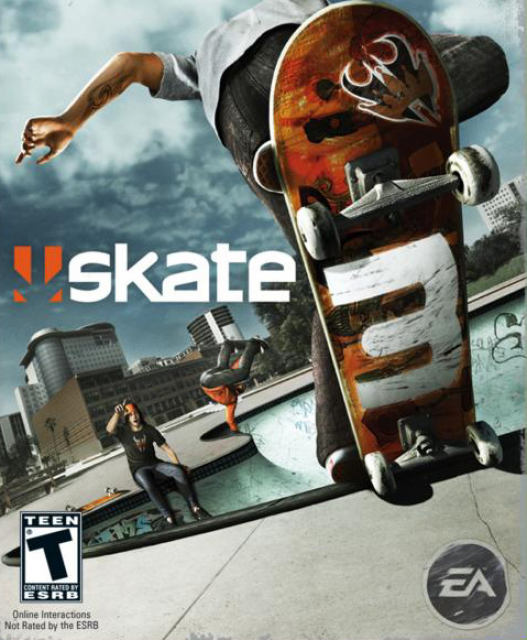