A Kabuki theater-themed RPG for the Super Famicom. The game was developed by RED Entertainment, best known for their Tengai Makyou (Far East of Eden) and Sakura Wars series.

Kabuki Rocks is a turn-based RPG that is heavily inspired by traditional Japanese Kabuki theater. Most of the characters and enemies are based on some aspect of Kabuki, including the wild-haired protagonist Rock. The game's equivalent of magic are songs learned at karaoke parlors performed on each character's musical instrument. Many other elements are based around performance arts, including a Paper Mario-esque "stage" backgrounds for random encounters.

The game was never released outside of Japan. 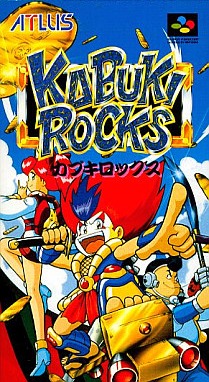