Super Famicom baseball sim developed by Affect in 1992. It is the first sequel to the Famicom game Koushien.

Koushien 2 is the second game in Affect's Koushien series of high school baseball sims, and the first to be released on the Super Famicom. As with its predecessor, players assume the role of a high school baseball team competing with others in Japan's Koushien stadium. It follows the standard "behind the batter" perspective of Bases Loaded/RBI Baseball. As with many early baseball games, the player moves all fielders simultaneously after a hit, rather than whichever one is closest to the ball.

Koushien 2 would be followed with two more Super Famicom sequels (Koushien 3 and Koushien 4) before the series would progress to the Sony PS1 with Koushien V. 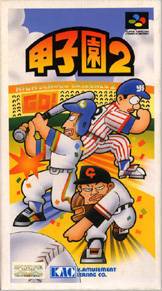