The Settlers 7: Paths to a Kingdom

Settlers 7: Paths to a Kingdom is the seventh installment in this long running light real time strategy / kingdom management series.

The campaign of the game consists of 12 levels, some of which also act as a tutorial for various mechanics of game, ranging from basic economy to more advanced tactics. In early levels only military victory is available, but later when Victory Points come in play the possibilities of varying tactics open up. The map consists of sectors that are either neutral, yours, ally's or enemy's. Each sector holds a single military outpost, but can also be upgraded to place palisades and stone towers next to roads. You can take over neutral sectors with brute force, use your traders to bribe them, or proselytize them with novice clerics. You can freely travel through sectors owned by your allies, but only military strength will help you take over sectors from your enemies.
The logistics of the game's economy is divided into 4 classes, military, church, trade, and building. Each class have their own queue displayed, where you can prioritize, halt and resume objects. Additionally you can also prioritize a whole class over another. Technology research is done with your clerics of varying levels, and are generally used to boost part of your economy and military by reducing production times, providing more resources, or just making your units faster. Establishing trade routes is useful if you are short on a particular resource, but have plenty of something else. Establishing routes requires traders of varying levels.

Aside from the various automated workers, you also have access to military, church and trade units.

The game has your basic multiplayer modes such as skirmish against AI and online multiplayer against other players. The gameplay is the same as it is in later campaign missions, victory points being the main path to a victory. Settlers 7 is also one of the first games to contain Ubisoft's controversial “always online” Digital Rights Management solution, that requires the player to have a constant internet connection available even during singleplayer campaign missions. If connection is lost on either the player's side or Ubisoft's side, the game will pause and wait for a reconnection. If connection can not be reestablished, the session will be locally saved and the game will quit to the menu. The saved games are also synchronized in “the cloud” on Ubisoft's servers, so the player can continue their game on another computer in another location.

Map Forge allows you to customize the maps you play in, by changing the amount and type of Victory points, mining resource locations, event locations, and other details of the map.

In Castle Forge you can customize the look of your castle for both the singleplayer campaign as well as skirmish and online multiplayer. Various objects that you can add are walls, flags, towers, windows and ornaments. You can also purchase more objects with your UPlay points as well as in-game reward currency that is accumulated during all your matches.

Settlers 7 has achievements that are directly related to your Ubisoft / UPlay account and UPlay points.

Uplay is a service where you earn points and use them to unlock bonus items. Here is a list of Actions (achievements) and Rewards for this game.

Settlers uses Ubisoft's custom DRM that requires an online connection at all times. 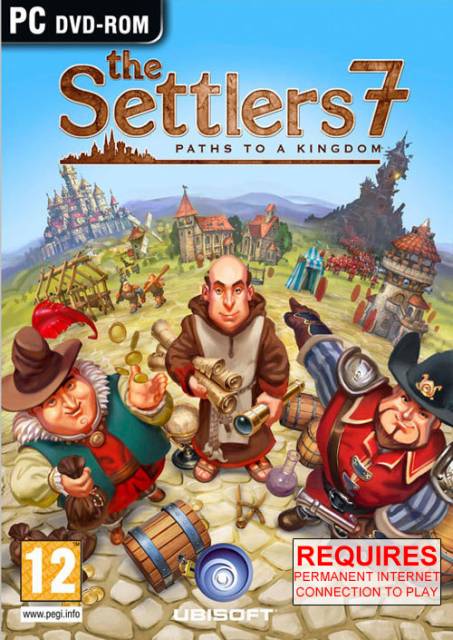