Raystorm HD is a enhanced port of the Taito developed, 1997  shoot em' up RayStorm. The game was released for Xbox Live Arcade and PlayStation Network in May 2010 with the Xbox Live Arcade version only being available initially in North America.

While the game is far more of a enhanced port than a true remake, it does contain a handful of additional features along with being cleaned up graphically to support higher resolutions. The game contains the ability to use new ships, the R-Gear and R-Gray 0. The R-Gear being a completely new ship for RayStorm HD , referencing the unreleased sequel to Galactic Attack/RayForce, R-Gear. The game also contains the 13 Ships mode from the PlayStation release which challenges the player with going through the game with each ship type and each type of lock-on (Manual or Auto). Previously the R-Gray 0 could only be used in this mode with the game now allowing for these ships to be unlocked and used in other modes. The game also contains online leaderboards and replay support along with the standard Xbox Live Achievements.

While the game received low to medium scores the game has only has only currently been reviewed by three gaming media outlets. The game is still considered solid gameplay wise, though it was heavily criticized for its higher price-tag (1200 Microsoft Points) lack of online modes, and the feeling of a generally lackluster port in terms of new additions, features, and visuals.
Raystorm Rez HD Rez Panzer Dragoon Orta Panzer Dragoon RayCrisis Galactic Attack Moon Dancer 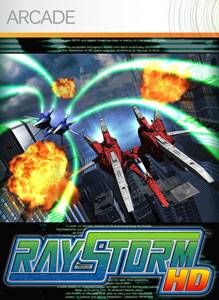