An adventure game developed by HAL Laboratory that was the largest title released for the Famicom.

While never receiving an official release in the West, an English fan translation patch was released for the Famicom version of Metal Slader Glory by Stardust Crusaders on August 30, 2018, the game's 27th anniversary.

Metal Slader Glory was created by a manga artist named Yoshimiru Hoshi that did freelance work at HAL Laboratory. He directed the game and based its story and character designs on his 1984 manga Akutenso Fixallia. Metal Slader Glory's development was greenlit by none other than the future president of Nintendo, Satoru Iwata. In 1987 Yoshimiru Hoshi was about to give a presentation at HAL to pitch them on the idea of Metal Slader Glory. As he waited to present he was testing his example animations at his desk when Iwata, who was Head of Development at the time, walked by. He was so impressed with what Yoshimiru was able to display on the Famicom's limited hardware that he gave the project the go ahead despite Yoshimiru only being a freelancer at the company and without him ever presenting his full pitch he had prepared.

Despite it being his first time directing a game, Yoshimiru was given total creative freedom, with no interference from anyone in the company, which led him to describe the game as "100% my vision."

Despite being the one who pitched the game based on his own original idea and then captained the project as creative director, Yoshimiru was never actually an employee of HAL; he was a freelancer. As such, his work contract stipulated that royalties would be his only compensation. Thus, Yoshimiru lived with his parents while working on Metal Slader Glory without pay for four years.

Yoshimiru worked on all aspects of the game except for programming and music, including writing, art, animations, sound effects, and gameplay. In striving for the highest visual quality possible, he incorporated effects like parallax scrolling, dithering, and anti-aliasing. He strove for every scene to feature some kind of motion as a way of bringing it to life. The art was also tailor-made to look best on the more flickery home televisions of the day rather than the high quality RGB monitors at HAL. Yoshimiru sought to do what conventional wisdom said was impossible on the Famicom.

Despite being the largest Famicom game ever released, Metal Slader Glory was originally intended to be much larger. Yoshimiru spent the first 3-4 months of the game's production as the only person assigned to the project, during which time he focused on the script. Only some time later, once the script was 80% finished, did it became clear that major cuts would be necessary to accommodate the Famicom's hardware limitations. Ultimately, more than half of the script was cut, including the original opening sequence. Utilizing his background as a manga artist, Yoshimiru drew a manga version of his originally envisioned opening sequence and included it in the game's manual.

According to Yoshimiru, the biggest challenge was creating high quality art within the confines of the Famicom's 16x16 palette limit, where every 16x16 pixel block was limited to using only three colors. To make adjacent blocks seamlessly blend together, every pair of adjacent blocks had to have at least one color in common. Large artwork comprised many such blocks, nearly all with at three or four adjacent blocks they must blend with. This complex interdependent puzzle had to be solved not only within every frame but also between all blocks in one frame and all blocks in the next frame throughout an animation sequence.

When the game was finally ready to release, HAL was in dire financial straits. The company had gotten trapped in a negative feedback loop of having to rush its games out the door prematurely in order to keep the lights on, then suffering poor sales as a result of the substandard quality. Metal Slader Glory was supposed to be the game that would break HAL out of its death spiral.

The initial production run of cartridges ended up being small because the game used expensive specialized hardware, such as the MMC-5 chip for its parallax scrolling, which happened to be in short supply at the time. Despite the initial production run selling through rapidly, HAL was unable to secure a second production run of the game. As a result, the game ended up being a financial disaster that failed to recoup even its marketing budget, let alone its high development costs. Facing imminent bankruptcy, HAL was saved by investment from Nintendo, making Metal Slader Glory the last game published by HAL as an independent company. 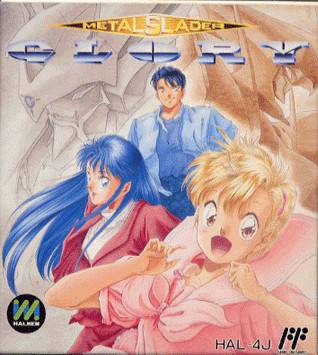