A side-scrolling brawler, Ninja Warriors is the story of three ninja androids sent to fight an oppressive regime in the future. It is the enhanced remake of Taito's 1987 Arcade brawler The Ninja Warriors.

The blue ninja and red kunoichi characters are joined by Kamaitachi (named for the "sickle weasel" of Japanese folklore: a youkai with bladed arms). In addition, the game has a significant graphical update, all new stage layouts and a new "Blaster" power-up system.

Ninja Warriors takes place in a dystopian future where Banglar, the President of the United States, issues martial law on the nation. A small band of scientists decide to rebel against the new military government with the creation of android robots codenamed Ninja, Kunoichi and Kamaitachi who are sent to strike back against the government.

Like Rush'n Attack, gameplay is restricted to a single, side-scrolling 2D plane. Players can move left and right as well as attacking, jumping, blocking and using a special attack or smart bomb styled attack on enemies. Special attacks and smart bombs require a 'Blaster' meter to be built up fully. The Blaster meter charges over time and is lost when the player is knocked to the floor or the smart bomb is fired, killing all enemies on screen. While the Blaster meter is fully charged players have access to modified, more powerful versions of their standard moves which kill enemies faster, however using these moves does not deplete meter. Objects and enemies within the level can be picked up and thrown as weapons against enemies also.

Levels, generally, scroll from left to right and have a boss encounter which, when defeated, ends the level.

British magazine Super Play gave this Super Nintendo Entertainment System remake of The Ninja Warriors a score of 84% upon its release for the SNES in 1994. 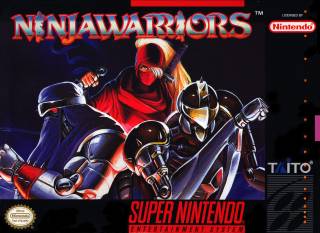